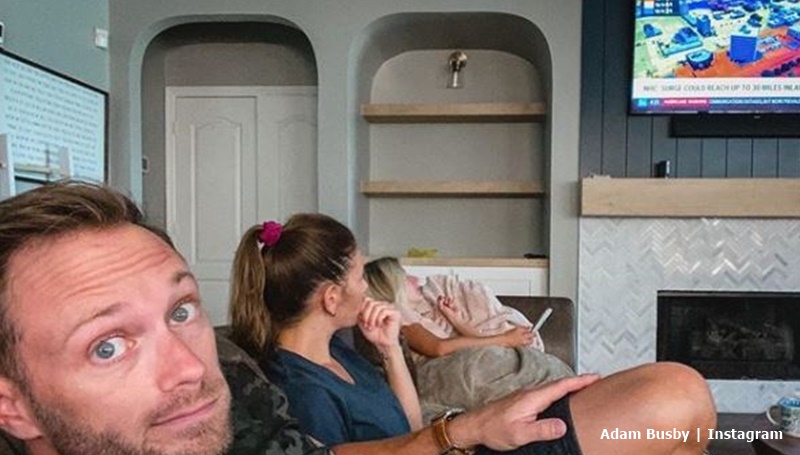 OutDaughtered fans stress about the Busby family as Hurricane Laura strengthens to category 4. Danielle started prepping ahead of the storm without Adam. But, it looks like the TLC star arrived home in time to help out. The news came on Wednesday that they boarded up the house and plan on hunkering down for the duration.

We reported on August 25, that Danielle sounded very stressed ahead of the hurricane. She told her fans on Instagram that she never prepared for a hurricane before without Adam. He was away in Kentucky at the time. So, it sounded like a scary situation. But thankfully, Adam got back home, according to an update he posted tonight.

Adam took to his Instagram and revealed a photo of them watching the weather channel. He captioned it with, “Hunkered down, roast in the oven and watching the weather channel. Praying that the winds die down, because Laura is going to be pretty catastrophic.” One OutDaughtered fan told him that Houston usually weathers this sort of thing quite well.

Hunkered down, roast in the oven and watching the weather channel. Praying that the winds die down, because Laura is going to be pretty catastrophic. #GoAwayLaura #hurricanelaura #itsabuzzworld

Hopefully, things don’t get too bad in Houston. Click 2 Houston reported that Mayor Sylvester Turner urged people to “stay off the roads after 8 PM,” despite the slight ferocity of the storm dropping for their area. However, things still remain dangerous, especially “near Interstate 45 at Interstate 610 in Clear Lake.”

Heavy rain, high winds and power outages are expected across Houston. But, at least Danielle doesn’t need to handle it alone.  The OutDaughtered mom shared that “Buzz and Papa…[boarded]  up windows around the house…But Man!! Keeping 10 girls entertained…😳… mine as well let them have a quick swim before the hurricane hits🤷🏻‍♀️.”

Buzz and Papa are still boarding up windows around the house…But Man!! Keeping 10 girls entertained…😳… mine as well let them have a quick swim before the hurricane hits🤷🏻‍♀️ #MamaLife #itsabuzzworld

ABC 13 noted that with the projected swing to the north, Houston might not get as much damage as feared. But, they note it’s still a very dangerous storm. However, it heads for the Texas/Lousiana coast with winds of 150 mph. Naturally, fans also worry about Adam’s family who live in Louisiana.

“The latest track and models are taking Laura towards the Texas/Louisiana state line near Port Arthur. Laura is continuing to gradually turn more northward.” As of right now, it looks like Houston will be spared from the major impacts and power outages. OutDaughtered fans told Adam and Daniel, that they hold them in their thoughts and prayers.

On his Instagram Stories, Adam told his fans that they seem okay for now. He added that his mom, dad, sister and the kids also came down from Lake Charles and stay with them. So for now, it seems that the OutDaughtered family’s as safe as they can be for the time being.