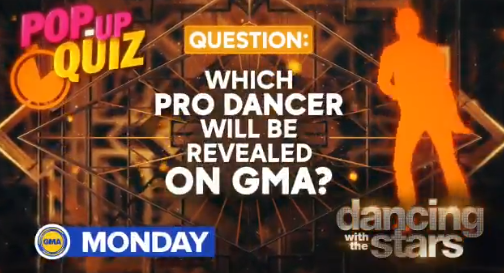 The Dancing With The Stars Season 29 pro cast list is out, but is it final? Britt Stewart and Daniella Karagach are new this season but will make an excellent addition to the cast of pro dancers. Pasha Pashkov, Sasha Farber, Jenna Johnson, Emma Slater, Brandon Armstrong, Alan Bersten, Val Chmerkovskiy, Peta Murgatroyd, Keo Motsepe, Gleb Savchenko, Cheryl Burke and Sharna Burgess will make their return to the stage. However, there will be one more joining the roster.

Good Morning America tweeted that one more pro will join the cast this season and gave some clues.

“He just had a baby with the love of his life, and she knows how to kick some ass,” the video teased. Well, that’s pretty telling. Artem Chigvintsev is engaged to former WWE superstar, Nikki Bella, and the pair welcomed their first child in July. Check out the teaser here:

MONDAY ONLY ON @GMA: Guess who? Literally! We've got another big @DancingABC-sized surprise for you — LIVE!#DancingOnGMA#DWTS pic.twitter.com/yZxMITi0I7

Fans remember Artem wasn’t part of the show last year. The news came as a disappointment to everyone, including the dancer.

“Obviously, it was a massive shock. It’s not even a job, it’s a lifestyle if you’ve been doing it for a very long time. There was never a thought in my mind that I’m not going to be doing it,” Artem said on “The Bellas Podcast” last year. “There’s always a chance, as a pro, you might be doing some performances on the show and there’s still an involvement in some sort. But getting this call, [hearing] ‘There’s gonna be no involvement in the show from now on,’ it’s like going through a breakup after 10 years.”

It’s sad that Artem Chigvintsev wasn’t part of Season 28, but he’s had a really positive year. The dancer met Nikki Bella when they were partners for DWTS Season 25. They began dating in early 2019 and got engaged back in January. A few weeks later, Nikki announced her pregnancy. Their son was born on July 31.

Artem isn’t the only one who wants him to return to Dancing With The Stars.

“People really missed his presence and he’s just an incredible dancer and he’s always an incredible partner too. He truly knows how to showcase the celebrity and he’s an incredible choreographer,” Nikki Bella said this summer on her podcast. “I’m praying and hoping that he’s back this season. Even for him, I just know how much he misses dancing and I know he would love to be back on the show. It would just be fun to experience it now as his fiancée because I’ve danced with him.”

It really seems like Artem Chigvintsev will get his wish! Do you think he’ll make a comeback this year? Stay tuned for more information. Dancing With The Stars Season 29 premieres on September 14 at 8 PM eastern time.