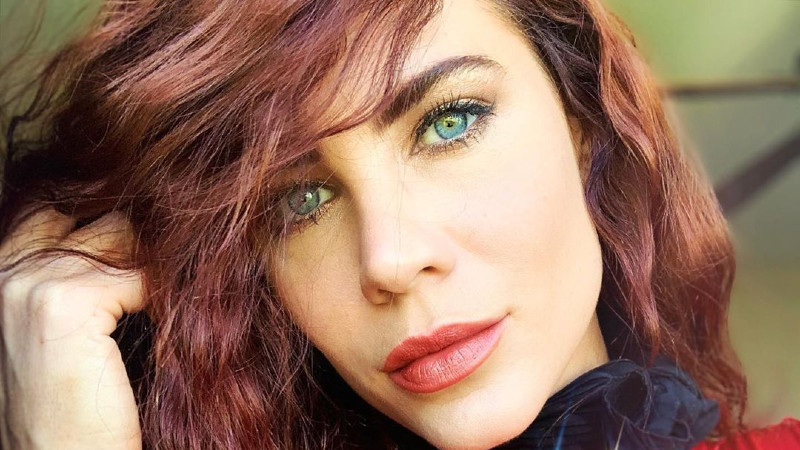 The Young and The Restless fans will soon see a new-familiar face. Actress Courtney Hope is soap-hopping around the CBS soaps. Two weeks after announcing her surprise departure from The Bold and the Beautiful, the soap star teases fans with news that she’s heading to Genoa City.

In 2017, Courtney Hope took on the role of Sally Spectra on The Bold & The Beautiful. No, not the original Sally Spectra known for her big hair and loud opinions. That iconic character was played by the formidable Darlene Conley until her untimely death in 2007. Despite the actress’s death, B&B kept her character alive, albeit off-screen.

Throughout much of her time on the soap, Courtney’s character was paired with Wyatt, played by DOOL alum Darin Brooks. During February Sweeps, Sally the second found out that she had a terminal illness. But still, it was a shock to fans that the actress was leaving.

Just two weeks ago, Courtney Hope took to Instagram with a shocking update: She was leaving B&B. And by the tone of her post, it wasn’t by choice.

The soap actress shared an emotional photo with a terse caption. She started the missive off with, “An abrupt ending to a monumental journey.” Courtney went on to reveal that she was leaving B&B.

After thanking her co-stars and the B&B crew, she implied that it wasn’t her decision to leave. She wrote, “Some things are out of our control.” Courtney did have a lot of love for her fans, thanking them for their support.

📝An abrupt ending to a monumental journey. The last three years have been amazing, and though I do not know what the future holds this chapter of Sally has sadly come to an end. I love my @boldandbeautifulcbs cast and crew and will miss everyone dearly, but await the day we may all play again. Some things are out of our control, and I thank the fans for your support through it all! Until then, I revel in new beginnings and everything the future has in store. 🙌🏼✨ Love you all, Sally spectra out 👩🏼‍🦰 ✌🏽 📖📘

The soap world was shook by the news of the abrupt departure from B&B. However, it didn’t take long for the actress to land on her feet. Soap Opera Digest reports the news that Courtney is moving to B&B’s sister soap, The Young and The Restless.

Very few details are known about her new role on Y&R. However, she confirmed the news on her Instagram account. Decked in a Y&R shirt and hat, the actress makes her next move clear. She holds a Crimson Lights coffee mug in the shot. For the caption, Courtney writes, “This seems like a good fit.”

Several of her former B&B co-stars gave their congratulations on her good news.

The B&B actress has been dating General Hospital star Chad Duell (Michael) for over three year. He recently wrote a heartfelt post on social media, wishing his lady love a happy birthday.

Happy Birthday to this amazing woman! Thank you for being such a bright light in my life! ☀️ I am a very lucky man! I love you ❤️ #teamdope

Will you be following Courtney to her new show?

The Bold & The Beautiful and The Young & The Restless both air weekdays on CBS.

Follow us on social media for the latest television news!

‘Too Hot To Handle’: Are Nathan Soan & Holly Scarfone Still A Couple?
‘The Amazing Race’ Is Too Afraid To Go To These Countries
The ‘Survivor’ Twists That Have Fans Furious
Is Brock Davies Still Doing Business With Randall Emmett?
Rumored ‘Celebrity Big Brother’ Leaked Cast List Is Wild