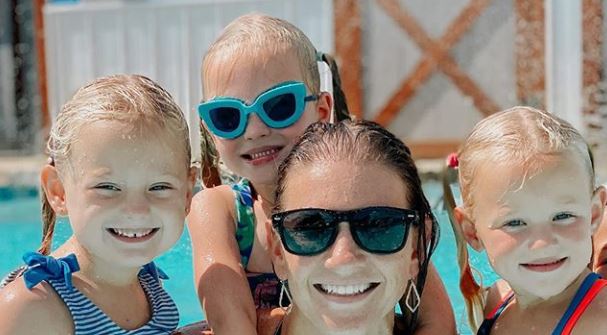 OutDaughtered Danielle Busby posted to Instagram a picture of the quints. The picture showed the five girls in their NICU shirts and graduation caps. Because the girls are starting kindergarten on Monday Danielle must have been feeling nostalgic.

The reality show star commented on the picture saying, I can’t believe these little NICU GRADUATES of mine are starting KINDERGARTEN TOMORROW! 😢😁They have come so far, grown so much, and have made me one PROUD MAMA!✨use code KINDER for 15% OFF 👆🏻NICU Giveback tees the quints drew themselves 💕SHOP.ITSABUZZWORLD.COM ✨

I can’t believe these little NICU GRADUATES of mine are starting KINDERGARTEN TOMORROW! 😢😁They have come so far, grown so much and have made me one PROUD MAMA! ✨use code KINDER for 15% OFF 👆🏻NICU Giveback tees the quints drew themselves 💕SHOP.ITSABUZZWORLD.COM ✨ #kindergartenready #buzzworldshop #itsabuzzworld #nicugraduate #nicu #nicugiveback #busbyquints

When Danielle Busby of OutDaughtered got pregnant with the girls they were born as preemies. Because the quints were born early they had to spend time in the NICU where it is equipped and staffed to provide intensive care to premature newborn babies. Once the first all-girl quintuplets were healthy enough they got to go home with their parents.

Five years later OutDaughtered quints Riley, Hazel, Olivia, Ava, and Parker completed their preschool days back in March. However, it was not the graduation that Danielle and Adam Busby was hoping for. Because of quarantine this year has been memorable for the quints and big sister Blayke. From the looks of social media, the family had a private graduation ceremony.

Since the girls have got older the NICU holds a special place for Danielle, Adam, and the quints. Last year Danielle got the quints involved by designing shirts to raise money for the NICU. Danielle’s Instagram post had the quints wearing this year’s newly designed tees. What a great way to teach these girls about giving back.

Are The Quints Ready For Kindergarten

OutDaughtered mom Danielle Busby has all five girls registered for kindergarten. Fans thought Riley was already in kindergarten. However, she was just in an advanced class to keep her occupied. Riley has kind of always been the leader of the other girls.

Danielle and Adam seem to have decided to keep all five girls together as they start out in public education. Only time will tell if Riley or any of the other girls take advanced enrichment classes. The girls of OutDaughtered are all very smart and have very unique personalities.

According to Soap Dirt the quints and big sister Blayke who will be in the fourth grade are all in the same school for the first time in their lives. Therefore, it will be an even more hectic and crazy life for the OutDaughtered family.

Congratulations to Riley, Hazel, Ava, Olivia, and Parker on their graduation. There’s no word yet on a new season of the show. However, I’m sure fans want a Season 8 after watching these girls grow from babies to the cute little ladies they are.

You can watch OutDaughtered on TLC. Check back later for the new season updates.