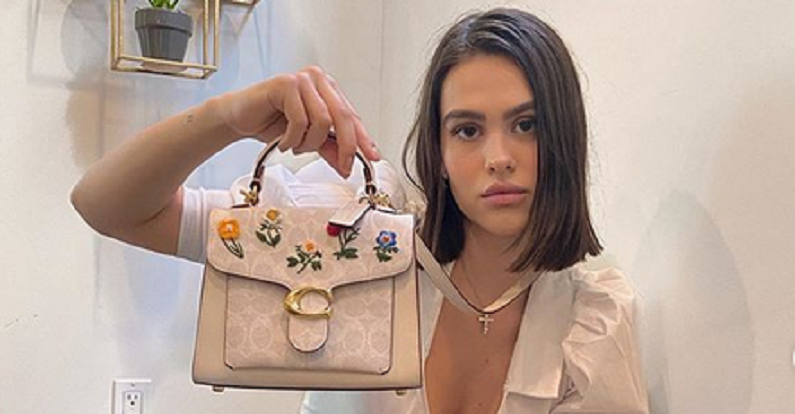 The Real Housewives of Beverly Hills star Garcelle Beauvais made alleged body-shaming comments about Lisa Rinna’s daughter. Amelia Gray Hamlin has spoken out about her eating disorder in the past. Since then, she’s been honest about her journey and struggles.

Now, the daughter of Lisa Rinna and Harry Hamlin is fighting back. She made it clear that she loves her famous mom’s dancing videos.

Talk about a proud mom. Lisa Rinna took to Instagram to share a dancing video of her 18-year-old daughter. On Thursday, August 13, she shared a video that showed Amelia wearing a sports bra and cycling shorts. She danced along to “Edge of Seventeen” by Stevie Nicks as she played the tambourine on her behind.

The video comes after Garcelle shaded Rinna’s “nearly naked” dancing videos. She claimed that her social media posts could affect Amelia’s eating disorder. As fans know, Rinna doesn’t like it when people come for her family.

Amelia smiled brightly in the video. She looked like she was having the time of her life. She also didn’t mind that her mom shared the video on her respective Instagram account. Amelia liked the post and even shared her input, as per The Blast.

She took to the comments section to lash out at Garcelle and her haters who body-shame her.

“My question is why would your dancing videos make me ‘feel bad’????” Amelia reportedly wrote. “Was she trying to body shame??? Am I fat? Would that make me sad????? Body shaming is real. And not okay. You can call my mom too skinny or me too skinny but if we call you too big???? Hunny it’s the same thing.”

Straight from the source. #CommentsByCelebs #RHOBH

Back in 2018, Lisa Rinna’s daughter announced she struggles with an eating disorder. Then Amelia had to defend herself after fans accused her of making up a storyline for more screen time. The young model said that she would rather do anything else than be on the show.

“I seriously can’t believe I’m being accused of lying about anorexia to get more ‘air time’ sorry but I’m forced to be on the housewives by my mom,” she said during the time. “Ask anyone it’s the last thing I want to do. I couldn’t care less about air time. So f*** you.”

Wow. I am the luckiest daughter in the whole wide world!!! I’m pretty sure EVERYONE wishes you were their mom. I was blessed to be able to have you as mine. You shine so very bright. You are such a kind and amazing soul. You’re VERY loud, which I used to hate but now I appreciate it cause nobody likes quiet people, really. Thank you for picking up my 25 FaceTime calls per day to talk about absolutely nothing, just so I can hear your voice. Thank you for teaching us how to be confident, and always love yourself. Thank you for teaching me that work ethic is all you need to make your dreams come true. Thank you for teaching me that kindness is the most attractive trait. Thank you for being you. Thank you for dancing in the doorway with me. Thank you for curling my hair. And thank you for watching Berenstein bears with me. Thank you for raising me, and being someone that I can always count on. I cherish our relationship so much more now that I’m older. I’m so lucky that I can tell my mom pretty much anything (well I do but a lot of the times you don’t want to know). I LOVE YOU SO MUCH AND YOU DONT LOOK AS OLD AS YOU ARE WHICH IS A GREAT PLUS! Lmfaooooo sorry I just said that to piss you off but like for real it’s crazy. Love love love you Queen @lisarinna

Amelia is doing much better these days. She’s been taking care of her mental health and body image issues. In therapy, she’s learned how to embrace her body. But it’s clear that Garcelle’s comments have struck a nerve.

The only thing that seems to lift my mood these days are my workouts. Which is funny, cause I usually hate working out. But lately, it has really been a huge mood lifter for me. Of course, I’m not motivated everyday, some days I stretch, and some I am super active. Regardless, the feeling of getting up and moving my body has saved me. I really recommend taking an hour a day to yourself 🦋