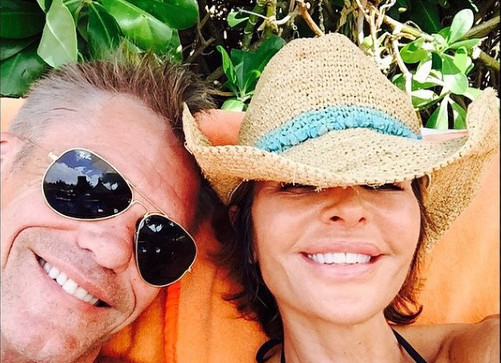 The Real Housewives of Beverly Hills fans still wonder about a heated argument between Kim Richards and Lisa Rinna. Back in Season 5, the reality stars got in a verbal sparring that almost turned physical. During a cast trip to Amsterdam, Kim implied that Lisa was hiding a secret about her marriage.

‘Let’s Talk About The Husband’

There is surely no love lost between Kim Richards and Lisa Rinna. Their feud took a shocking turn during the Amsterdam trip in Season 5. During dinner, the topic of Lisa’s marriage to Harry Hamlin came up. While Lisa’s motto on RHOBH is for everyone to “own it,” Kim implied that Lisa has a secret of her own.

At one point in the dinner, Kim said, “Let’s talk about the husband,” meaning Harry Hamlin. Lisa Rinna quickly shut Kim down. Before throwing a wine glass in Kim’s direction, Lisa leaned across the table, as if she were going to choke Kim. Luckily for Lisa, she managed to keep from physically assaulting her co-star.

Of course, back then, physical assaults were the bread-and-butter of reality TV. In ‘woke’ 2020, there is a line of what producers will accept before the reality star is outright fired.

We never did find out what Kim wanted to talk about. At the time, fans speculated that Harry Hamlin, like Kim, was an alcoholic. But now fans have a new theory about this big secret in the Hamlin/Rinna marriage.

Screenrant notes that Harry Hamlin and Lisa Rinna have been married since 1997. At the time, Lisa was starring on Fox’s Melrose Place after getting her start on Days Of Our Lives. Any couple with a long marriage is bound to have ups and downs.

However, RHOBH fans think Harry Hamlin made a slip of the tongue early on in Season 10. The latter half of the season is clearly revolving around the Denise Richards/Brandi Glanville affair allegations. But earlier in the season, Harry Hamlin reunited with Lisa Rinna after being out of town for an acting job.

The duo were filmed chit-chatting about their daughters. Harry tells her that he asked them to dinner, but they wanted to “come see” him instead. Fans want to know why they would need to come see him if they all live in the same house?

Harry Hamlin admitting he doesn't live with Rinna. Their daughters live at home. Why would they need to "come see" him when he returns to BH? Guess we won't be talking about this all season #RHOBH pic.twitter.com/Zo3IuJE8Ec

Some fans zero in on that “slip-up” from Harry as an indication that they are hiding a separation. Additionally, fans speculate that Harry doesn’t live with his wife and daughters.

Why is Rinna talking about Harry Hamlin as her husband when they're separated? #RHOBH

At this point, Lisa has yet to address the rumor.

There is another rumor from a few years ago that Lisa DID address. There was a rumor going around social media that Harry Hamlin had an affair with an actress while married to Lisa Rinna. As fans know, Harry was once married to Desperate Housewives star Nicolette Sheridan. (So was Denise Richards’ husband, Aaron Phypers.)

However, Nicolette famously left Harry for singer Michael Bolton, though she denies it as tabloid gossip.

The actress in question is Sisters star and Bruce Springsteen’s ex-wife, Julianne Phillips. After fans harassed the actress on social media, Lisa Rinna spoke out. She told her to “leave [Julianne] alone.”

Julianne Phillips did nothing leave her alone.

Tell us in the comments if you think speculation regarding Lisa and Harry’s marriage is true? Or is it just another internet rumor?

The Real Housewives of Beverly Hills airs Wednesdays on Bravo. On the latest episode, Denise confronts Lisa about her hurtful behavior.

The two ladies have a sitdown. This feels rough. • #realhousewives #bravotv