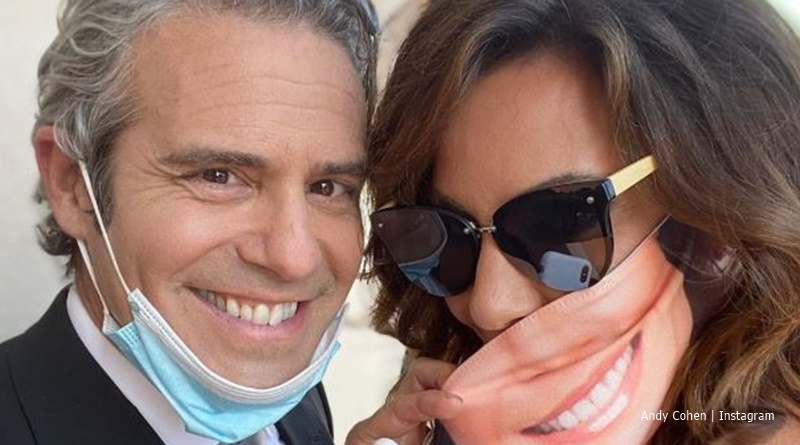 RHONY fans recently approved of Luann de Lesseps as she agreed with fans that way too much drama came from too much alcohol.  We reported that Leah seemed the main culprit, but she’s not the only one by any means. Anyway, many Real Housewives of New York fans complained so they seemed happy that Luann spoke about it. But now, she and Andy Cohen got slammed for getting so close to each other and dropping their masks for a photo.

On Wednesday night, Andy took to his Instagram and shared a photo of himself with Luanne. Although they both had masks with them, they pulled them down for the photo. It came after fans heard that the Real Housewives of New York Reunion would not happen remotely. While in-person filming for the Reunion appealed to fans, the fact that this picture came out annoyed some of them totally.

Andy captioned it with, “That’s a WRAP! Thanks to our incredible crew who helped us execute this reunion safely. And thanks to Lu for wearing a mask of her own lips!” But very soon after he posted it up, Bravo fans started complaining. One RHONY fan commented, “Should either of you really be lowering your mask like that while so close to each other?” Naturally, that sparked off a debate among the rest of the people who saw the post. Plenty of them slammed the two Bravo stars.

One of the fans who slammed Andy and Luann wrote, “Taking this pic with your mask not worn properly and with Luann’s mask not completely covering her face and being so close, I did not think you would take that kind of risk.” Another one noted, “Did u forget social distancing rules.” But others slammed the slammers. One person told them how “sick” they are of people like that always going on about masks. Another fan pointed out that they should let people make their own decisions and stop preaching.

Other RHONY fans commented that Andy already got the virus and recovered so he should be fine. But that erupted into an argument about the science. Some people said that he might get it again, Meanwhile, others demanded evidence and proof that people might become reinfected. Actually, in April this year, some governments hoped that they could issue certificates to people who recovered from the virus. But the World Health Organization wrote, “There is currently no evidence that people who have recovered from COVID-19 and have antibodies are protected from a second infection.”

That’s a WRAP! Thanks to our incredible crew who helped us execute this reunion safely. And thanks to Lu for wearing a mask of her own lips! #RHONYReunion #LuAndImproved #YaHabibi

In July, the NIH noted that in “rare” cases, some people may get the virus twice. A study revealed that macaque monkeys get immunity from the virus “for a while.” While not conclusive, a study seems hopeful most people may not succumb a second time, but the duration of immunity’s not yet clear.

RHONY fans know that Andy recovered from his virus. Of course, potentially, all the cast tested for the virus before the Reunion.