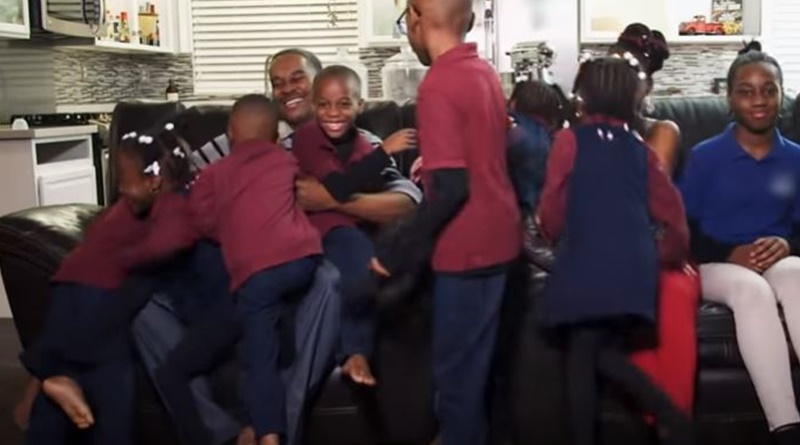 Doubling Down with the Derricos arrives on TLC on August 11. The show features Deon and Karen the mom and dad to 14 kids. Plus, fans see a nephew, Eric, his wife, and Deon’s mom. The parents of multiple multiples, including quints, expect another set of triplets when the show begins. Bur nowhere in the cast does the name Derron Derrico feature. So, who is Derron and why is he off the show? After all, he’s apparently the eldest son of Deon.

Doubling Down with the Derricos – Derron Derrico the mystery son

We reported on the full cast. The bio for the new TLC show reveals their eldest child’s described as Darian. She’s the oldest daughter and the teasers reveal that at age 14 when they started filming, she steps up to assist while her mom gets confined to hospital. Karen Evonne Derrico expects their last set of triplets and doctors worry about her carrying them full term. TLC confirmed that someone name Eric Jefferson, older than Darian, also stars in the show. But, he’s a nephew and not a son. However, Deon talks about him as being like a son to him.

So, what happened to Deon’s first child Derron? Why isn’t he mentioned in the Doubling Down with the Derricos bio and storyline? Fans already heard that one triplet passed away. But that wasn’t Derron. In fact, it looks like Derron’s alive and well. As he’s a full adult now, maybe he opted to stay off the reality show, you might think. But, it seems that the story goes way deeper than that. The first mention we found came on IMBd. There, they noted that Derron’s an adopted son. They wrote, “Karen and Deon also have a 17-year old adopted son, Derron Derrico.”

What happened between Derr0n and Deon?

Digging a bit deeper, it seems that Derron’s estranged from Deon and Karen. Fans possibly already heard that back in 2014, Deon Derrico faced fraud charges relating to real estate. However, in 2018, Deon talked with KTNV and revealed that all those charges against him got dropped. So, he’s in the clear for that. But in 2014, at the start of the investigations, the Los Angels Review-Journal reported Derron’s input on the case. And, he wasn’t a happy young man. Aged 22 at the time, Derron described issues he held with his adopted dad involving a student loan he didn’t need. He alleged some sort of fraud in his name.

In his interview, Derron explained his estrangement from Deon. The outlet noted that Derron felt really angry believing his dad used his name to max out credit cards. But, the police took no action at the time. Estranged from his adopted son, Deon apparently said, “Derron is hell-bent on destroying the family’s name out of sheer jealousy.” Plus, he added, “Everything I stand for, he’s the opposite of…I feel like I helped raise the devil.” Meanwhile, Doubling Down with the Derricos mom, Karen Evonne just wanted Derron gone from their lives.

Derron worked as a security guard

As of March 2014, Derron remained estranged from Karen and his dad Deon. The Review-Journal said he worked as an unarmed security guard. Deon apparently met Derron back when they weren’t aware that Karen could conceive. And, they weren’t married at the time. Derron seemed a bit of a naughty boy even after Deon adopted him. Deon met Derron when he worked as a school bus driver in Detroit. The outlet noted that Derron sat in the “foster system.” So Deon adopted him. Initially, the family faced troubles with Derron who admits he acted out as a troubled kid.

Apparently, after the Doubling Down with the Derricos family moved West, “Derron was caught taking money from neighbors’ cars.” He then racked up a juvie record and spent time in “Southern Peaks Regional Treatment Center” in Colorado. But, he claimed he lived a clean life since he turned 18. Alone and not with the family, the alleged credit issues from the alleged maxing of cards by Deon still gave Derron problems years later. He said, “I’m getting my life together. I have a good job [and]…a kid on the way. I want to go to school. But I need to fix my credit. I want him to own up to everything. As it stands, I have proof of everything.”

Is Doubling Down with the Derricos adopted son still a security guard?

Derron apparently hoped that one day, he and the Derrico family might reconcile. But, for now, it seems nobody speaks about him, certainly not in any of the reality TV show’s bios anyway. Possibly, Derron still works as a security guard as there’s a profile on Linkedin with that name and profession, based in Las Vegas. However, it’s not clear its the same adopted son of Deon and Karen.

Savannah Chrisley Deletes Post After Todd Embarrasses Her
Kelly Ripa Snubs Michael Strahan In New Book?
Is Adult Swim Getting Squeezed Out Of The Anime Industry?
Teresa Giudice Said One ‘DWTS’ Judge Had It Out For Her
‘Bringing Up Bates’ What Went Down Between Josie & Sisters?