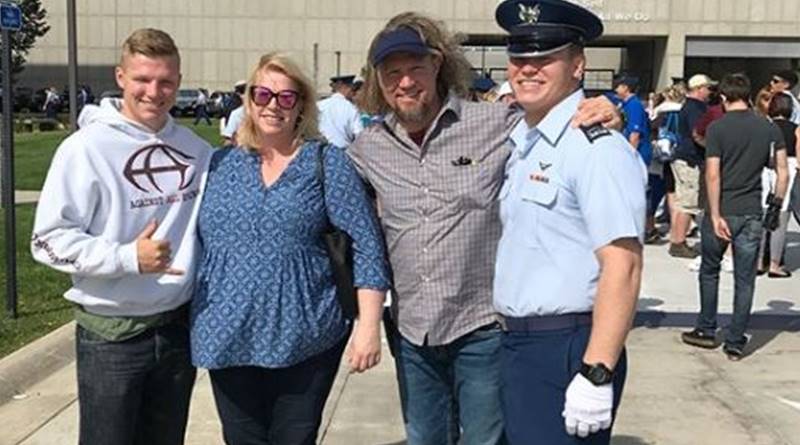 Sister Wives star Janelle Brown couldn’t make it to Hunter Brown’s Airforce Academy graduation day. That came about because of the coronavirus. Fans might recall that Hunter joined the Academy in 2015. But, his studies continue now as Janelle revealed he moves on for post-grad work at Johns Hopkins.

Sister Wives – What will Hunter do at Johns Hopkins?

According to Janelle, who shared the news about Hunter on Instagram, he studies nursing. Sharing a photo of her son, she wrote, “Hunter got his diploma in the mail yesterday. Distinguished Graduate (Top 10%) from the US Air Force Academy. We are so proud of him.” Then she noted that he goes to “Johns Hopkins for grad school this fall to complete a masters in nursing.” Janelle loved his company for three months “this summer.” The Sister Wives star noted that the three months at home happened without any planning.

But, while she feels so proud, the time draws close for him to leave. Janelle described his going as “bittersweet” because he probably won’t spend as much time with them again. Well, fans might wonder why Hunter goes and studies nursing at Johns Hopkins. The Stevenson University Website explains more about it. Apparently, the military has a special program where post-grads can study there. “Upon graduation…some students are selected to attend a funded law school or several medical programs.”

Fans react to the news about Hunter Brown

Over on Instagram, plenty of people responded to the news from Janelle. Fans don’t often see much of Hunter on the TLC show these days, so they rely on her for news. One fan wrote, “Congratulations Hunter, very well deserved !!! Janelle he looks so much like you! Wishing him all the best for a bright future 👏👏👏👏👏.” Another fan said, “Not that angry teenager in Las Vegas anymore…so happy for him and you…you’ve done well with him👍🏻 and the others too.”

Meanwhile, fans of Sister Wives literally watched the kids grow up. So, they almost feel a part of the Brown family. One fan mentioned, “Is it weird that as a long time viewer of your show I feel proud for your family and Hunter? lol Super cool, congratulations!” Not alone in that feeling, another one noted, “I feel the same way.”  But, many more fans noted Hunter’s choice of profession. One of those wrote, “Good people raise good people. Good on ya’ Hunter…the most noble of professions and your big heart and kind soul will be your biggest asset.”

Hunter got his diploma in the mail yesterday. Distinguished Graduate (Top 10%) from the US Air Force Academy. We are so proud of him. He is headed to Johns Hopkins for grad school this fall to complete a masters in nursing. It’s been a fun bonus for this mama to have him home for 3 months this summer. That was unplanned. But the time is drawing close for him to leave and he will never again be home for this long of a time. It’s very bittersweet.

What do you think of the news from Janelle Brown about Hunter? He certainly did well for himself so far and brought a  lot of pride to his mom and dad. Actually, the boys in the family seem very happy taking an approach to life via the military. Both Garrison and Paedon also took that route via the National Guard. Sound off in the comments below.