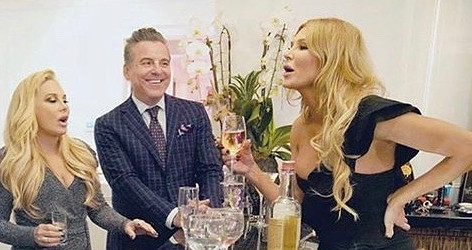 Viewers were enthralled with the July 22nd episode of The Real Housewives of Beverly Hills. Brandi Glanville finally gave the details of her allegations of an affair with Denise Richards. Therefore, her apology to RHOBH alum Adrienne Maloof flew under the radar. As did Brandi seemingly implying that Lisa Vanderpump was behind her confrontation with Adrienne in Season 3.

Many new and old fans didn’t understand the reason for Brandi’s apology. Let’s refresh our memories with a trip to Season 3.

Throughout Season 3, Brandi dropped hints that she knew something that RHOBH co-star Adrienne Maloof did not want public. Brandi openly spilled the secret during dinner with her co-stars during Episode 6.

However, the bombshell was edited out of the broadcast, leaving viewers confused. Adrienne and then-husband, Paul Nasif, confronted Brandi at an event at Kyle Richards’ home in the same episode.

The former couple insisted that Brandi’s allegation was a lie and threatened legal action. While the season was airing, Adrienne went public with her secret: She gave birth to her twins via a surrogate.

She later refused to attend the RHOBH reunion and was ultimately fired for skipping it.

Brandi Apologized to Adrienne During Season 10

Several RHOBH alums attended Kyle’s charity gala during Season 10. In addition to Brandi and Adrienne, Eileen Davidson, Camille Grammer and Kim Richards made appearances. It was during the event that Brandi finally apologized to Adrienne.

However, her apology didn’t sit right with some fans. During her apology, Brandi commented that Adrienne knows it wasn’t Brandi’s idea to bring up the surrogacy way back when. Adrienne said she knows. While neither clarified whose idea it was, fans have their theories.

Many fans immediately honed in on Lisa Vanderpump as the mastermind. As viewers know, Lisa has long been accused by her former RHOBH co-stars as being a “puppet master” for drama.

In fact, it was part of the reason why she left the show after Season 9. The other ladies accused Lisa of selling a negative story about Dorit Kemsley to the press out of revenge.

Way back in Season 2, Adrienne accused Lisa of selling stories to the press, too. Some fans speculated that getting Brandi to bring up the surrogacy was Lisa’s idea for revenge.

Which RHOBH Star is the ‘Puppet Master’ Now?

With Lisa gone, fans wonder which RHOBH star is pulling the strings now. Many fans focus on Kyle as the culprit, per The Blast. In fact, Brandi’s appearance at Kyle’s house during episode 11 set off many fans’ spidey sense. Several fans pointed out how convenient it was that Brandi was sitting in Kim’s car with a microphone pack already on.

#TeamDense is calling Brandi’s revelation a “set up.”

Dont worry denise. We know it was a set up. Even if it were true we Really dont care! The women should be ashamed of themselves. Esp @TeddiMellencamp and @KyleRichards who were acting shocked lolll pic.twitter.com/06ngrOWExb

They further call out Kyle for her comment that Brandi’s not a liar. Particularly after years of Kyle outright calling Brandi a liar for her comments about Kim’s drug use, which later turned out to be true.

Additionally, one fan went deep into Brandi’s tweets to find one from 2018. The tweet alleges that Kyle once sent Brandi a cease and desist letter.

Kyle Richards: I don’t believe Brandi is a liar

It seems as though Adrienne’s guest appearances on Season 10 are complete. Brandi may appear later on in the season. Regardless, she will definitely be a topic of discussion during the upcoming Rome trip.