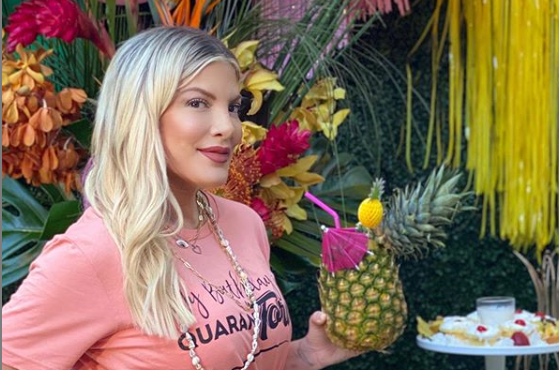 Tori Spelling has recently had a lot of money trouble. She refused to pay a bill she owed to American Express. The bill had grown to almost ninety thousand dollars. American Express had filed a lawsuit previously in 2016. The next year, she was ordered by the court to pay it back, but she allegedly refused.

This wasn’t the first time Tori has been in trouble for not paying her bills. Her and her husband Dean McDermott had a case against them in 2016 from City National Bank. They owed over two hundred and sixty thousand and that case is ongoing. Now it seems she’s had money seized to pay American Express back.

Tori Spelling Is No Stranger To Money Issues

Last year Tori Spelling didn’t seem to be taking the court cases seriously. She talked to Good Day New York about it because she’d made light of it on her show 90210. She said, “that was a decision I made, and we made together to put that in there. That’s such speculation, media loves to talk about it, so we were like, ‘Let’s face it straight on. Let’s put it in there.’” Fans think it’s one thing to poke fun at yourself, but when the court gets involved it might be time to pay debts.

Rosana Scotto asked her if she could pay her bills and she said, “yeah thank you. I am.” But it seems like she really isn’t. McDermott was angry at Scotto reportedly saying her asking that wasn’t classy. Tori’s followers accused her of using her five children to make money on Instagram. Her followers weren’t shy about posting their opinion.

This is the best thing I’ve ever done for my fur babies!! @mytailoredpet … – You just take a short quiz to get a personalized recipe tailored for your dog’s needs so they can live their best, LONGEST life. – Door step delivery was super fast and all of my pups Arthur, Musso, Thea, Benny, and Joon are as obsessed with it as I am! They LOVE it!  Your pups will love as much as mine. Trust! – So, I’ve got a code for 60% off for you!! Take the quiz at tailoredpet.com and use code TORI60 for 60% off your 1st subscription order. #TAILOREDPETS #AD

Tori fired back, “didn’t make any $ from this picture and not promoting anything aside from sharing our actual lives. This is us. Please make informed judgements.” In December, Tori posted on her Instagram with her family all wearing matching pajamas and throwing snowballs. All her children are in the picture; Liam, 13, Stella, 12, Hattie, 8, Finn, 7, and Beau, 3 along with her husband. One fan posted, “I wonder if your kids get tired of being directed and produced for these paid promotions.”

She also charged her fans ninety-five dollars to attend a virtual meet and greet with her during the pandemic according to US Weekly. Fans didn’t find her money grab during a crisis impressive. Tori Spelling is constantly under scrutiny for the things she does on social media and when it comes to her career. Despite the court ordering her to pay the money, American Express still had to have the courts seize it from her bank account. In a previous interview the TV star admitted to being terrible at managing money. No doubt her days of looking for ways to make money are far from over.