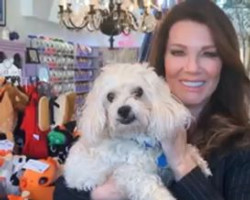 As you’ve likely heard by now, NBC’s Peacock TV streaming service is live. It dropped on Wednesday, July 15. The available content right now is just a small sampling of what the service will have in the future.

On July 16, Peacock TV aired a special 30 Rock reunion available only on the platform. During the special, a promo commercial aired of content coming to Peacock TV soon. Surprise! Lisa Vanderpump from RHOBH and VPR has a new show coming out.

The rumors of another Lisa Vanderpump spin-off date as far back as September, 2019. At one time, there was speculation that she was getting not one, but TWO spin-offs. The spin-offs rumors were a show  about her Vanderpump Dog Foundation and/or her Vanderpump Cocktail Garden. The latter is centered in Las Vegas.

Fans noticed the text “Vanderpump Dogs” and “A Peacock Original” overlaid a quick shot of Lisa from the VPR opening. In the next sequence as a small dog standing on a table. People put two and two together and assumed Vanderpump Dogs is the next spin-off.

Is #VanderpumpDogs a thing? #lisavanderpump might be getting a new series on the Peacock streaming service #RHOBH #realhousewives

And they were right! Peacock TV confirmed the news to People magazine. However, there is literally no other information about the new show. Other Peacock TV content included in the trailer are Punky Brewster and Saved By the Bell reboots. Both are slated to premiere sometime in 2020.

The Future of VPR Up in the Air

Days after her firing, Stassi made a pregnancy announcement. Fans are clamoring for Bravo or another network to give Stassi her own show. Other fans believe Bravo did right, but also suggest Jax Taylor, Brittany Cartwright and Lala Kent go next.

After the firings, Bravo’s Andy Cohen said more were coming. However, over a month later, no one else from VPR has been fired.

Many fans think the show can’t survive losing Stassi and Kristen. Viewers never much liked Max and Brett, so that’s no big loss. However, Stassi’s popularity landed her a best-selling book last year with Next Level Basic.

Tell us in the comments if you think Bravo will bring VPR back for Season 9.

NBCUniversal has yet to announce if Vanderpump Dogs will be available on Bravo and the Peacock TV streaming service.