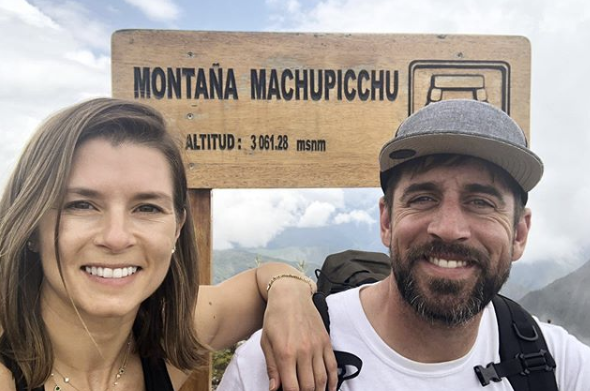 Say it ain’t so! Professional athletes Danica Patrick and Aaron Rodgers decided to call it quits after two years of dating. We really hoped they would be one celebrity couple to go the distance.

Fans noticed Danica behaving a little strangely on Instagram. She reportedly unfollowed Aaron on Instagram and removed several pictures of the couple from her profile. Only a few remain. A source later told HollywoodLife, “I can confirm that Danica and Aaron are no longer together.”

One of the few photos that remains is their vacation photo from Paris in 2019:

The power couple began dating in February of 2018. Both climbed to the top in their respective sports. Who could ask for a better match? As of April, it really seemed like the two were very much in love. The former NASCAR driver engaged in an Instagram Q&A session with fans. A few asked what it was like to be in a relationship with the Green Bay quarterback.

Danica replied, “If you like a partner who is extremely attractive, super-intelligent, very thoughtful, patient (lord knows I can be stubborn), loves to travel, is open-minded, is into growing in this life, and can ball. Ya, it’s pretty amazing.”

Fans had no idea a few months later, everything would change.

The Couple Under Quarantine

Many couples are splitting up during quarantine. Could Danica and Aaron’s relationship be another casualty? Danica also mentioned in the Instagram chat the couple isolated together as the pandemic continued. Spending a lot of time with someone in such close quarters is bound to do a little damage here and there. However, at the time Danica said the couple intended to pick up where they left off after the pandemic ended. She even mentioned the two were engaging in constructive activities such as cooking and learning new languages.

So what will happen with Aaron and Danica now? Though they parted ways, Danica seems she is filling her days with fun and friends. We sure would like to try a bottle of Danica Rose!

Aaron hasn’t posted since June 3, but we imagine his mind is on the upcoming NFL season. According to several sources, the NFL plans to carry on a regular season. However, that could quickly change if COVID-19 cases continue to rise. Aaron probably has his hands full worrying about the future of his career. No matter what happens, we wish the two of them the best.

It’s still a little early, so all the breakup details are yet to be known. What do you think happened? Did quarantine do them in or is there something that hasn’t surfaced yet? Keep checking back with TV Shows Ace to learn more about this celebrity breakup and other TV news.