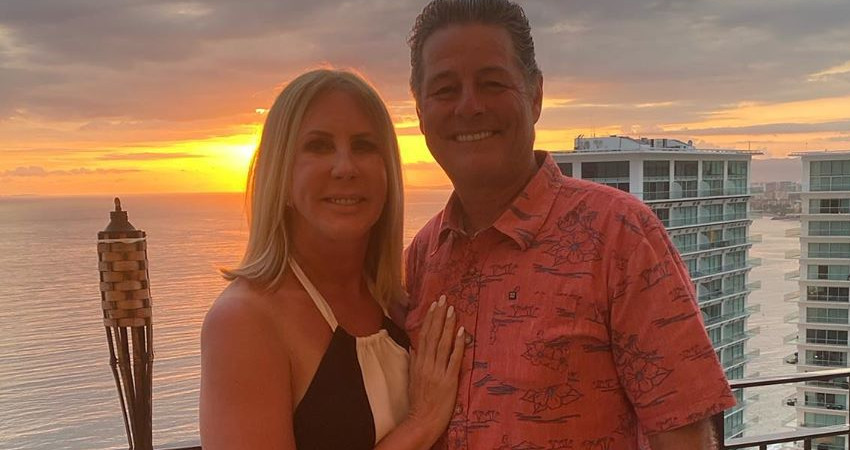 The Real Housewives of Orange County star Vicki Gunvalson is living her best life. And fans are still hating on her for it. Last week the insurance company mogul posted a date night selfie with fiancé Steve Lodge. The couple are in Puerto Vallarta, Mexico, at Vicki’s new vacation home/future retirement home. She bought a condo in the tropical paradise last month and was finally able to travel to decorate it.

As any RHOC viewer knows, Vicki has had a lot of plastic surgery. She’s been quite open about going under the knife, even citing former RHOC star Slade Smiley’s insults as a reason. Slade took to bashing Vicki’s appearance by calling her “Miss Piggy.”

In the recent selfie shared by Vicki, some fans felt the need to tell her to lay off the plastic surgery.

Steve and I found a new restaurant that is close to the new condo that is SO “fancy”. #venturingout #datenight

One fan suggested that Vicki “let nature take its course.” In fact, the commenter notes that they used to serve Vicki coffee before joining RHOC and says Vicki was much prettier then.

Vicki clapped back at the comment. She wrote that she admits to having a “lower facelift” three years ago. She tells the follower that she will do whatever she can to look her best, regardless of what other people think.

Another follower told Vicki to stop with the filters. However, the RHOC star denies using the cosmetic enhancement. She has another idea why her face might look different: weight gain during the quarantine. Vicki admits she’s put on “5 pounds” during the coronavirus pandemic.

Not all fans were negative Nellies. Some fans told Vicki how great she looks and how happy they are for her. One fan hopes to be in such a great financial place when she’s Vicki’s age.

One Fan Admits Being ‘Nosey Roses,’ Asks For Wedding Update

Vicki’s looks weren’t the only hot topic in the comments. Since the photo included her fiancé, one fan asked for an update on the wedding. The fan admitted to being nosey before asking if Vicki and Steve have a wedding date set yet. The RHOC replied, “nope, not yet.”

Back in April, Vicki revealed on her Whoop It Up With Vicki! podcast that they were going through some “stress” in their relationship. She’s said several times that Steve doesn’t know how to “whoop it up” like she does. The couple were supposed to marry in April, but had to postpone their wedding due to the coronavirus. Vicki didn’t feel good about getting their families together.

Good thing, because her daughter, Briana Culberson, announced that same month that she is pregnant with her third child. She’s due in November with a baby boy.

The RHOC OG was in a chatty mood with her followers when she posted the selfie. One fan called her out for the way she treated RHOC newbie Braunwyn Windham-Burke during Season 14. Vicki defended her behavior, shading Braunwyn as “annoying,” Reality Blurb reports.

Vicki may be the only one who finds Braunwyn annoying, considering Braunwyn was asked back for Season 15 and Vicki was not.

The Real Housewives of Orange County resumed filming this month. Check back with us for updates on when it will air on Bravo.