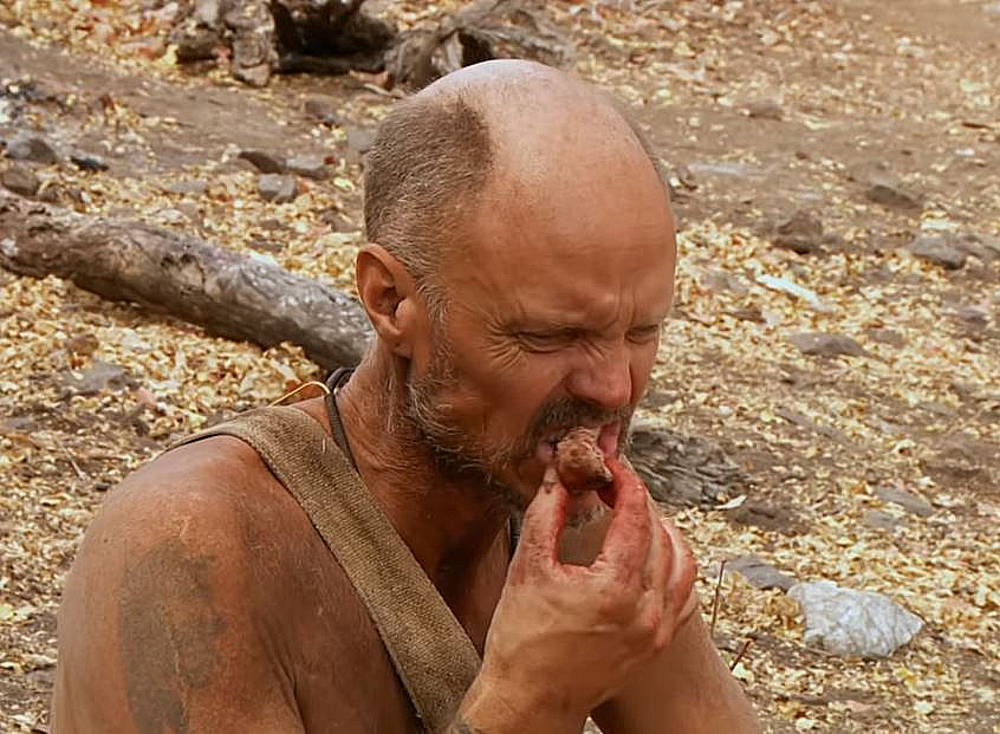 Discovery’s naked competition Naked and Afraid XL is back on tonight and TV Shows Ace has a great preview that shows how resourceful two of the participants are in the bush.

We open with two former Naked and Afraid contestants who are back for more fun.  Meet Gwen Grimes and Wes Harper who are tucking in to roasted klipspringer.

The two are doing their challenge in dusty and dry South Africa where many dangers big and small are all around them.

These hearty survivalists are sharing a meal in our preview cip and they are extremely grateful to have the food that they are eating, replenishing their energy stores so they can refine their living space and secure it from predators.

Who is Gwen Grimes?

A former police officer in Wasilla, Alaska, this resourceful contestant appeared on Naked and Afraid, and is back for more to test her skills for survival. She grew up in Elmira, Oregon in a family that was just a bit off the grid.

“We were pretty poor. We hunted, trapped, fished,” Grimes told the Alaska Sporting Journal. “In the morning, before I’d hop on the bus to go to school, during hunting season my dad would wake me up at friggin’ four in the morning and we’d go out and hunt until it was time for me to go to school.”

Who is Wes Harper?

A father of five, Wes Harper’s wife was the one who signed him up initially for Naked and Afraid. He appeared on the tenth season of Naked and Afraid before XL and in a two-part episode, Stalked in the Savannah: Part 1 and 2.

He was paired with Jesse Everett, both placed in Brazil’s Savannah which was home to snakes, deadly wasps and bees and other unpleasant insects.

A little Klipspringer is an adorable antelope whose name was created by the Afrikaners describing what it does best, jumping rocks.

This little nimble hoofer is about 20 inches tall, not so big, and is the protein that Gwen and Wes are cooking up for dinner. This tasty protein will give them an edge where the other contestants are having issues finding enough or palatable protein at that.

What is this Naked and Afraid XL about and where is it?

The extremes of climates in South Africa sets the stage as the heat searing and scorching savannah will serve as the backdrop for the twelve survivalists enter The Valley of the Banished.

That’s a real place, where the unwanted are doomed to their forever timeouts from the group.

There’s barely anything for them to eat there, or drink, and forget sleeping soundly.  Something will bite you, buzz you or prowl around at night hunting for food.