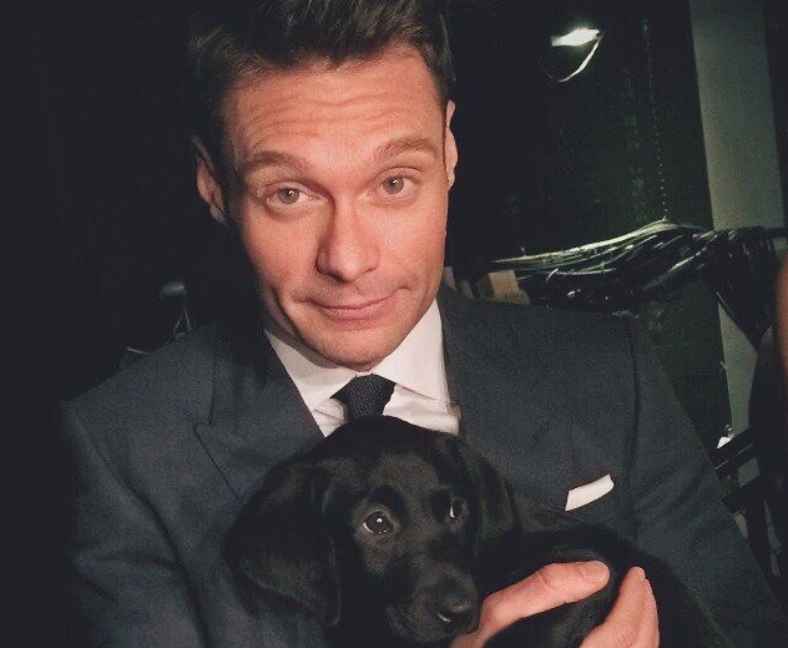 It’s been just over a week since Ryan Seacrest and Shayna Taylor split for the third time. It is probably wrong to say the pair have been together eight years. However, they have dated on and off over that length of time. After their latest split, Ryan has admitted he finds it tough to speak about his emotions during this tough time. He says he finds it difficult to be “vulnerable” with his emotions.

Ryan and Shayna had been together over a period of eight years and this is the third time they have split. While talking about how hard it is to share your emotions openly, Ryan says this is something most men struggle with.

The host spoke about the challenge during a segment of On Air With Ryan Seacrest on Monday, July 6. He says men “can, at times, find it challenging to share their feelings openly.” Ryan does say this is a generalization, but it is something he read and he is “just conveying” this.

#tbt to my first attempt at Georgia's favorite trick: the puppy eyes.

As reported by Us Weekly on June 29, the American Idol host has split from Shayna Taylor for the third time. This is after around eight years together. Ryan’s rep says at the time that he and Shayna decided to end their romantic relationship amicably some time ago. The rep continues by saying Ryan and Shayna will remain “good friends, as well as “each other’s biggest supporters.” Both Ryan and Shayna will “always cherish their time together as a couple.”

Ryan Seacrest speaks about their ‘ups and downs’

Shortly before the couple’s breakup was announced, Ryan had opened up about his on-again-off-again relationship with Shayna. In a May episode of Live With Kelly and Ryan, he wished Shayna a happy third anniversary.

Shortly after her split from the TV host became news, Shayna shared an inspiring quote about change to her Instagram Stories. She wrote that you will “never need to convince the right person to love you.”

Taylor said you cannot change them, no matter what and cannot get them to commit to you if they are not ready to. She wrote that “change must be inspired from within,” adding that old adage, “actions are always louder than words.”

Ending my weekend on a high note! I’ve never been much of a “going out” girl so this is truly my idea of fun— a glass of wine, a big spread of delicious snacks, and my favorite companion 🐶

Ups and Downs of Ryan Seacrest and Shayna Taylor

Ryan and Shayna first started dating in 2013. One year later, they split for the first time. In 2016, after being apart for a while, the couple decided to give their romance another try. This time, they lasted until February 2019. Much later in the year, Seacrest shared he was bringing Shayna to his family’s Thanksgiving celebration. This confirmed they were, indeed, back together yet again. However, now they have split again and it is unknown if they will reconcile.