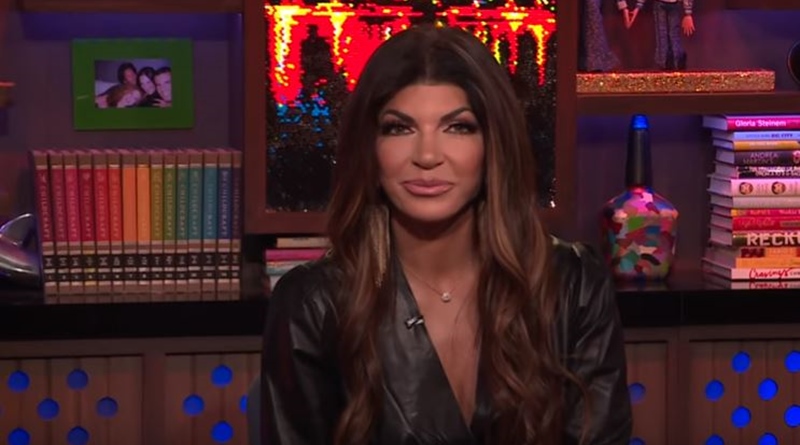 RHONJ stars Teresa Giudice and Joe split after his deportation to Italy. Her fans seems a lot sadder about that than she does. But, Teresa made up her mind ages ago that she certainly didn’t plan on relocating to Italy. It also seems that a long-distance relationship wouldn’t work either. So they split. Teresa’s dating again, and out went the bed she and Joe shared since forever.

Season 11 spoilers for The Real Housewives of New Jersey reveals that Teresa starts dating again. And, not just anyone. Teresa’s preference includes an older man. She likes the idea of a Jewish man who presumably holds USA citizenship. While word came out that Joe and Teresa split amicably, certainly it seemed to fans that she wanted out more than Joe. After Joe left her, she went for a silver-blonde look and also started renovating her home.

It seems she’s determined to start anew without anything of Joe to reminder her of their failed marriage. E! Online reported that part of that clean sweep involved renovating her home. The RHONJ star actually started that while back. But, the final touches remain unfinished due to the coronavirus. The outlet spoke with “interior designer Jimmy DeLaurentis.” Teresa seems to want to move away from the dark memories of the last few years that saw both her and Joe land up in jail.

Good Morning Everyone & Happy Hump Day! In case you missed me this morning on @hsn, I will be back again live in the 1pm & 9pm hour talking all things you need to know about the amazing “BELLA BROW” micro-blading pen! You don’t want to miss this amazing deal!! See you there on @hsn!! Love, love , love you! 😘

Joe’s bed goes out the door

Apparently, the whole place will look much lighter and brighter. No dim and dark for the Real Housewives of New Jersey star anymore. Jimmy said, “She wanted a whole new feel.” So, they tossed a lot of the old furnishings out and make the place look lighter. Teresa now boasts a lot of furniture that Jimmy recommended. He noted that they still plan on moving more stuff in there. “We’ll go back in the house when we can and put in my custom furniture, and I picked chandeliers, cocktail tables, rugs, artwork, these huge lamps I want to put all over the place,” he noted.

As for the bed that the RHONJ star shared with Joe Giudice, that’s gone. Teresa got rid of it. She  told Jimmy, “I have got to get rid of that.” Actually, one can understand why she got rid of it. Especially, considering she’s dating again. Nobody wants old ghosts in the bedroom during a bit of rumpy-pumpy, after all. But somehow, the news seems more final about the split between her and Joe than the actual announcement at the time. Clearly, Teresa put Joe physically and mentally right out of her life now.

What do you think about RHONJ star Teresa Giudice getting rid of the bed she shared with Joe for so many years? Do you think she really needed to do that as part of her efforts to move on with her life? Sound off in the comments below.

Kelly Jo Bates Meets Her Newest Grandchild: See Photos
Production Spent Tons On ‘Bringing Up Bates’ Before Pulling The Plug
Which Pro Wrestler Wants To Join ‘Dancing With The Stars’ Next Season?
‘Too Hot To Handle’: Are Nathan Soan & Holly Scarfone Still A Couple?
‘When Calls The Heart’ News: All Eight Seasons To Be Available On This Streaming Service