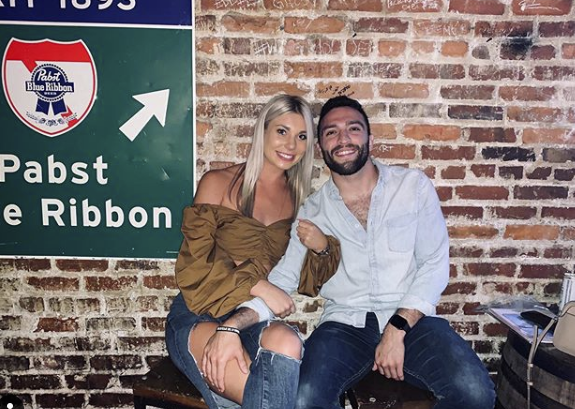 The drama never stops for Love Is Blind stars Jessica Batten and Mark Cuevas. Just hours after Jessica posted photos of her new boyfriend on Instagram, ex-boyfriend Mark just had to do the same. Jessica proudly showed off her new beau, Dr. Benjamin McGrath. According to Jessica, he’s her age, which as we saw on the show, matters quite a bit. They have been dating for the past four months and getting cozy during quarantine orders. Could wedding bells be in the future for the former cast of Love Is Blind?

Shortly after that post, Mark posted his own photo with a beautiful new woman. However, he’s keeping her identity a secret for now.

Love Is Blind fans will remember that Jessica and Mark were less than a perfect couple. Mark seemed truly devoted to Jessica, but she was more interested in chasing Barnett. Barnett had little interest in Jessica and chose his now-wife Amber instead.

Over the course of the series, Jessica frequently complained about the age difference between her and Mark. These grievances spawned a slew of Internet memes.

At the end of the season, the couples had to decide if they would get married or split up. To the surprise of no one, Jessica left Mark at the altar.

As for the Other Couples?

Love Is Blind was certainly a life-changing experiment for everyone involved. Jessica and Mark didn’t pan out, but many of the other couples made it.

Amber and Barnett are still happily married and can be seen wearing Pokemon costumes in public. Cameron and Lauren hit it off right from the beginning and are still together as well. Firecracker couple Damian and Giannina had some pretty explosive arguments and chose not to get married on the show. But still managed to find their way back to each other.

Everyone seemed so sure that Kenny and Kelly would tie the knot, but it was not to be. Kelly ultimately left Kenny at the altar as well. Carlton and Diamond broke up long before they even made it to the altar. It certainly does not seem that they have any intention of getting back together.

There’s no official word on when season 2 will premiere, but Netflix announced a casting call earlier this spring. We suspect filming may have been a little difficult due to the pandemic. Hopefully, we’ll get a brand new season very soon and we can binge that if there is ever a second quarantine.

Who was your favorite Love Is Blind couple? Many fans are heavily invested in Lauren and Cameron’s relationship, but we think there is something to be said for Barnett and Amber too. Comment and let us know.