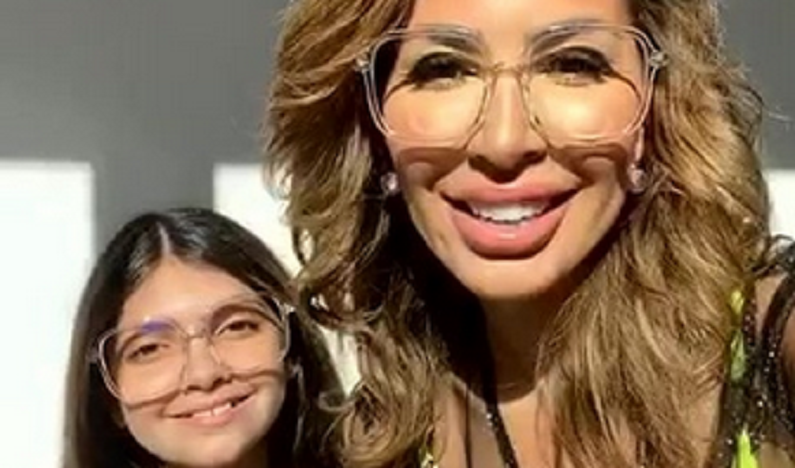 Teen Mom alum Farrah Abraham already had the talk with her 11-year-old daughter Sophia. She revealed that one of Sophia’s sleepovers led to this important conversation. In an exclusive interview with Us Weekly, Farrah admitted that Sophia knows about the birds and the bees.

She felt it was important to educate her. The reality star was pregnant with Sophia as a teenager. Farrah didn’t like hearing that Sophia’s friends’ parents weren’t giving them the talk. So, she decided it was time to bring it up to her pre-teen daughter. Read on to see how Farrah addressed this important topic to her daughter.

IT’S OFFICIAL @sophialabraham HAS GRADUATED ! Congratulations Sophia! You are off to middle school! WOW! Celebrating this moment with a surprise FaceTime photoshoot with your favorite photographer @danigeddes I’m grateful to see you grow up to a well rounded awesome female who is going to change the world, as your mom who has fought to overcome negative stigmas about windowed teen moms and strived hard to raise a girl who is open to all cultures, stop abuse, stop hate, stop racism,better communication, learning history of hardships before your time and knowing the change in generations of our family that were so needed, not loosing your time to be a child among all the fame, popularity and opportunities you have I’ m blessed you have helped me break the cycle of teen pregnancy, racism, discrimination, enable woman’s voices of all ages to be heard with equality when I see most older generations of men & woman took advantage of widowed, struggling teen mom minority voice (1.96%) of the nation . As part of a one percent minority Sophia thank you for giving me the strength to advocate for teen moms, children of single parents and woman overall. As I feel teen moms and children should never succumb to a mans mediocracy of what a woman should do and thus all woman & children should never dull their shine, nor attack one another for a mans gain to make others feel comfortable the strength & the wisdom God gave me to take responsibility as a mom and dad to do the right thing for our futures I’m so proud and blessed for the learning and change we have progressed to- I hope other woman can find the strength to not shame others due to their short Commings and weaknesses rather increase mindful self awareness & progress as we have! Sophia you know who you are & i’m so proud that your bringing so much good around the globe with your fans in Australia, Canada, America, Asia, Dubai, Greece,etc all from a struggling widowed teen mom in Iowa, GOD IS AMAZING & The only man you need 🙏🏼🎉💯❤️☀️ LOVE YOU ! & know Your Daddy Derek watches your success & loves you his little angel & All of our family loves you & is beyond proud! Now go enjoy your summer! Middle Schooler🥳🥳🥳

Farrah Abraham had THE talk with daughter Sophia

Us Weekly asked Farrah Abraham if she gave Sophia the all-important talk. She answered with a resounding “yes” and explained why it was important. Farrah quickly learned that Sophia and her friends are already talking about it. But she didn’t like hearing that their parents didn’t talk to their children about it.

“Because when the kids all like to do sleepovers and some of her friends have older siblings, um, yeah, I definitely had to do a talk with the parents after what I heard,” Farrah explained. “To be honest with you, it’s really only been prompted by all the other parents not really having those talks.”

The MTV star revealed that those parents, including those with boys, did not speak to their children about “what is proper.”

“That has kind of sped up the conversations that I have to have with my daughter, because of boys in her age group, and or, at her sleepovers with her girlfriends who have brothers,” Farrah said.

This is what I find very useful during this quarantine. Instead of risking, I gave myself some love. Namely, I had the opportunity to work with LELO, and they sent me Soraya 2 Cruise that offers optimized dual-stimulation which is of course only for ladies and only for multiple pleasure. At first, I was surprised by all the features they told me this toy has, but I decided to get rid of the shame and to try it. I am telling you, this toy is a really good representative of every woman that takes care of herself – it is gentle, good shaped, elegant and very luxurious because it can work for hours and days.For more head over to Lelo.com #Staysafe #Ad #noshamesummer #farrahabraham

However, it wasn’t an awkward conversation for the mother-daughter duo. Farrah has no problem talking about it and says all parents should.

Farrah Abraham previously revealed that her daughter is “craving” to get to know her dad’s side of the family. She took to Instagram on Friday, July 3 to share their trip to Kansas City with Derek Underwood’s family. They went to celebrate the Fourth of July together. She called their previous family reunion a Fourth of July “pre-game.”

“Sophia definitely craves getting to know her father’s side of the family because she doesn’t have her dad,” Farrah said in an exclusive interview with In Touch. “I’m just grateful we get a couple of days together.”

I’ve never seen some of these fireworks before! Popcorn was a favorite ! Totally had a heart attack! The best time of the year is here! Have safe family fun! #4thofjuly #2020 #farrahabraham #sophiaabraham #fireworks #summer

She also said that Derek’s father, Jerry Underwood, welcomed their daughter into the family. Derek tragically passed away in an automobile accident while Farrah was pregnant with her daughter in 2008. The incident occurred while she was filming 16 and Pregnant. Farrah has tried to keep Derek’s memory alive for the sake of her daughter.