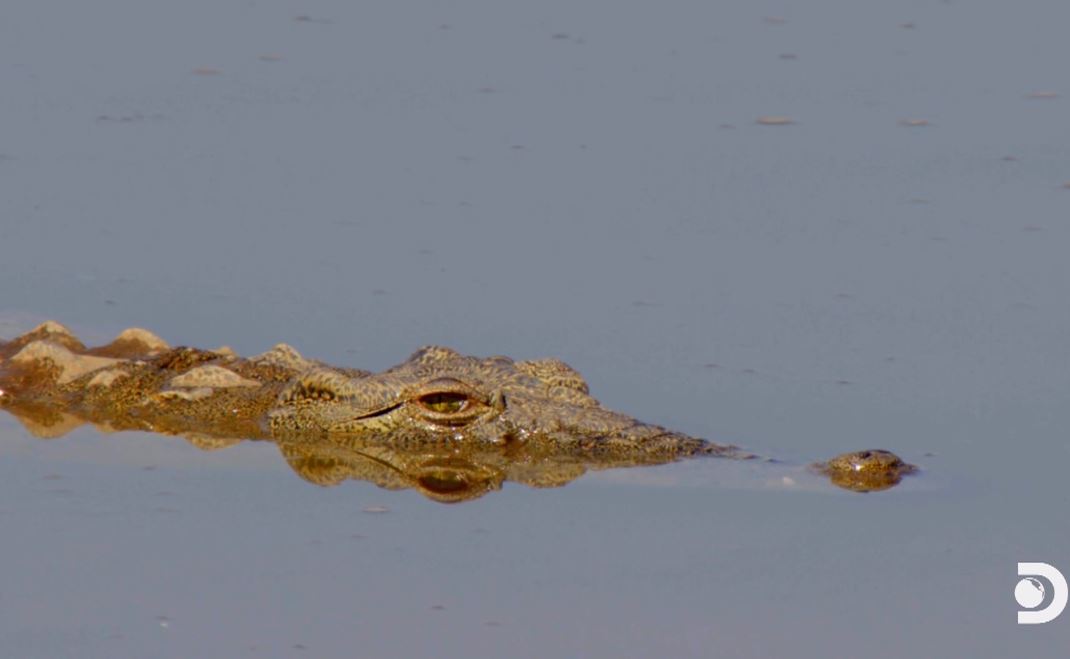 On Sunday’s Naked and Afraid XL, Valley of the Banished, the humans are being hunted by crocodiles and it’s all caught on camera.

On our TV Shows Ace exclusive video clip, we see Sarah of Goldendale, Washington and Jonathan of Southampton, New York realize the watering hole they have been visiting is the local “murder hole” as Jon calls it.

This is where a large crocodile population have staked out as theirs, and the presence of these two naked humans have added a delicious dimension to their otherwise four-legged daily menu.

Sarah spots the crocs as she alerts Jon, and the two quickly regroup and get back to their base camp for safety.

But their new friends have followed them.

Did you know that crocodiles can run up to 20 miles per hour and weigh in at 12000 pounds? They can also live to be a hundred years old and their jaws can apply 5,000 pounds of pressure per square inch, making it the strongest bite of any animal in the world.

Now the title of this series is pretty accurate, as fully naked Sarah and Jon are rightly entering the “afraid” part of the episode.

What happens in the preview of Naked and Afraid XL?

Looking towards the watering hole, Sarah says that she is officially out of the water and the edges of the water hole.  She says: “I’m out, oh no…there’s another one coming. He just ducked under the water but he’s still coming this way. I’m keeping this ammo for later.

Looking all around and assessing the danger, Jonathan says: “They’ve been seeing us as prey since we got here but they were like keeping their distance now but they’re actively hunting us…I feel like they want their murder hole puddle back.”

He adds: “Ryan might not be coming back today it’s already like past travel time I can’t see him traveling in this. If he didn’t get here before it got hot out, he ain’t coming.”

Then we hear the noises of a large crocodile coming towards their base camp.

Alerted, Sarah says: “Do you hear that?”

The two spot a massive croc making its way straight towards them.

What happens on Naked and Afraid XL?

In an all-new season of Naked and Afraid XL, only the strong will survive as a new crop of survivalists, including those seeking redemption, are looking to conquer the 40 day challenge. Four teams of series veterans are taking on 40 days and 40 nights in The Valley of the Banished.

The unforgiving savannah of South Africa may look familiar but there’s a new twist unlike anything ever attempted on previous seasons. This year’s twelve survivalists are about to enter The Valley of the Banished.

Featured in the Cast of Naked and Afraid XL Season 6 in TV Shows Ace exclusive preview are Jonathan and Sarah.

With literary a dearth of edible vegetation and usable resources that are nearly impossible to come by, only the very clever, calm and strong will survive. Each survivalist must handle the conditions and keep their wits, as they prove their worth to the group, or risk being cast out.

The stressors of the austere landscape also mean the contestants will have to manage their clashing personalities, as these survivalists will be pushed past their limits.

To make it through this Naked and Afraid XL challenge, every survivalist will have to give it their all and earn their right to stay in the tribe and anything less than your all will mean banishment from the group.

Watch our TV Shows Ace preview clip and make sure to tune in Sunday: