Over the weekend, TV Shows Ace reported that Jessa Duggar and Ben Seewald enjoyed some classic summertime fun with their kids. The couple shares three children, Spurgeon, 4, Henry, 3, and Ivy, 1. In the photos that Jessa and Ben shared, the kids are eating watermelon and swimming in a kiddie pool. They’re hanging out on their deck.

Both Ben and Jessa documented the fun day, sharing several photos each. Even little Ivy is sitting in the pool in her bathing suit and eating a tasty slice of watermelon.

As usual, Duggar fans are gushing over the cute little kids. Ben and Jessa’s kids seem to be a favorite of Counting On fans. They think that the kids are adorable and that Ben and Jessa are great parents to them.

In the comments section, most of the comments were positive, talking about how cute the kids are. Fans love how involved Ben and Jessa are. They’re always finding fun outdoor activities for the kids to enjoy.

But, one fan was quick to notice something potentially dangerous in a couple of the photos Jessa shared. The watermelon is on a bench on the deck. There’s a cutting board on the bench with a few slices, as well as some larger uncut pieces of watermelon behind it. Ivy is standing in front of the bench with the slices in reach. And, near the slices is the knife that Ben or Jessa used to cut the watermelon. 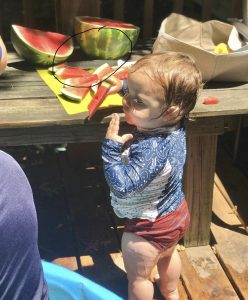 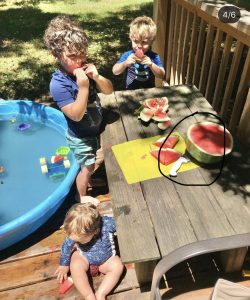 One Duggar fan, in particular, noticed the knife and mentioned it to Jessa. The fan wrote, “So cute, but pleaseeee move that knife!” In response, Jessa wrote, “It was out of reach.” Jessa also added a blushing face to her response. The original comment has since been deleted, so Jessa’s response was deleted as well. It’s unclear whether Jessa deleted the comment or the fan did.

A couple of other fans also pointed out the knife. One wrote, “The first thing I noticed being a Mom myself was that gigantic knife on the table by those children. I know you’re right there taking the picture but maybe be a little more careful! Adorable children!”

Of course, this isn’t the first time that Jessa has been parent-shamed or called out. It happens quite often, which is likely due to her being in the public eye. Jessa typically has a snappy response to throw back at Duggar fans. And, sometimes, like in this situation, she simply explains herself.

So, what do you think of Jessa’s response? Does the fan have a reason to be concerned? Share your thoughts below.

Also, don’t miss the return of TLC’s Counting On. The Season 11 premiere airs on Tuesday, July 7.