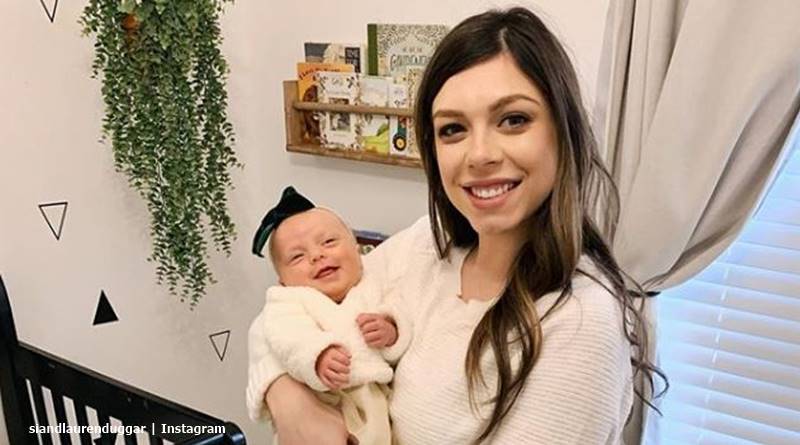 It appears as if Duggar snarks were digging deep into Lauren Duggar’s Instagram profile recently. A little over a week ago a thread emerged on the Duggar Snark Subreddit. The thread called attention to a collection of photos Lauren shared over a month ago on May 8th. More specifically, it called attention to the second photo.

Duggar trolls and critics slam Lauren for photoshopping a photo of her daughter.

The photo in question featured Lauren holding her baby Bella into the air. They are standing outside in a very grassy field. Thick greenery including bushes and trees are slightly out of focus, but visible behind Bella.

The topic of conversation, however, is the tiny rainbow floating off to the side of baby Bella’s head. As those who follow Lauren and her husband Josiah know, Bella is a rainbow baby. The duo sadly miscarried Asa. They frequently talk about Asa on social media.

Counting On critics suspect the rainbow was intended to suggest Asa was in the photo with the family. But, turns out, they were not really feeling Lauren editing rainbows into photos featuring Bella. Did it take away from Bella? Some seemed to think so.

Here’s what Duggar snarks had to say about the presumably edited photo:

Did Lauren Duggar want fans to think the rainbow appeared on its own? Critics believed so.

Now, word Duggar snarks were not feeling the mysterious rainbow floating in Bella’s photo spread. It became chatter in Facebook fan groups. And, eventually, Lauren Duggar’s followers on Instagram began to discuss it. They, however, were not happy with the topic. They were quick to slam trolls. Lauren even had a few professional photographers come to her defense. Here’s some of what they had to say.

“I’ve been a photographer for 11 years. As a photographer you become very familiar with your lenses and how they react when manipulating light. Ive often used my lens and light accordingly to capture rainbow and sunglasses especially in rainbow baby situations. Ive also photoshopped them. But again why people are being negative is beyond me. Real or photoshopped they are remembering their baby and have the right to know matter how they want to.” One individual penned.

Bella is 6 months! 🥰 We can’t get over how fast this little girl is growing. She is quite adventurous these days. She’s just starting to crawl and it’s so sweet to watch her learn how to explore the world on all fours. We love this little girl so much and are so grateful to God for her!💕 . .#bellamilagro

Technically, Bella was a rainbow baby.

Another chimed in: “I love the people who have time to fret,debate and coment over wether Lauren photoshopped the pic of Bella or not, telling Lauren to get a life. Hello?! How about you first, ok sweetie?! Lol. Who cares?! Is it suddenly against the law? Also, Bella is a rainbow baby. It would make sense to photoshop a rainbow. Plus, its not like shes trying to pass it off as a real rainbow, right?! Shesh! I feel bad for them.”

Overall, Counting On fans were extremely vocal about the issue. Most noted Bella WAS a rainbow baby. So, it would make sense for rainbows to be present in some of her photos. Moreover, why did it matter of Lauren edited a photo of HER daughter? It was both HER daughter and HER photo after all.

Some Duggar fans wished those trolling on the young mother would “get a life.”

Are the critics being too hard on Lauren Duggar? Fans encouraged trolls to back off.

“Everyone that is being rude and hateful to Lauren over a FILTER, I would encourage you to GET A LIFE! Are you that bored? Is your life so mundane that you have nothing to do other than shame a mother!? Like, REALLY!?! Some ppl seriously have ZERO class and ZERO compassion! It’s not like Lauren said, ‘look at the rainbow behind Bella!’ She was just decorating a beautiful photo of HER CHILD! ANYONE that comments hateful things on a picture of a CHILD, is absolutely DISGUSTING! I’ll be Praying for You!” A third individual exclaimed in the comments.

So, do you think people are overreacting about the rainbow in Bella’s photo? Do you think Lauren Duggar edited the photo? Tell us about it in the comments!