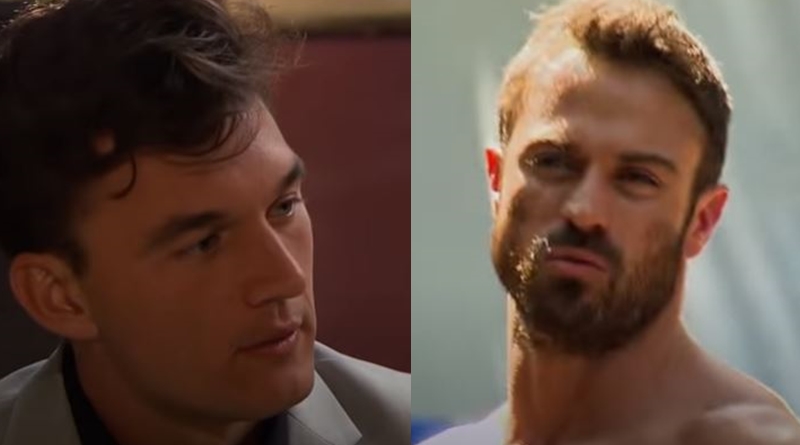 Bachelorette alum Chad Johnson’s known for that show, Bachelor in Paradise, Famously Single, and Celebrity Big Brother UK. He’s very unpopular since allegations he indulged in robbery and domestic violence. Plenty of fans certainly wouldn’t mind punching him in the face. Now, he signed up for Celebrity Boxing, and Tyler Cameron’s the one person he hopes to beat.

Chad made the headlines for all the wrong reasons after he punched a hole in Annalise Mishler’s wall. Later he ended up arrested for more violence. The police charged him with “domestic violence,” we noted. In March this year, he and Annelise talked about his arrest. It all revolved around Chad, who stopped drinking, but when they broke up, he decided a few drinks wouldn’t hurt, given the circumstances.

Apparently, the Bachelorette alum denies drinking every day and proudly noted he attends the gym twice a week. Well, presumably he gyms a bit more than that right now and gave up his drinking. The Blast reported that “he inked a deal with Celebrity Boxing.” Chad Johnson knows one person he’s really like to take on in the ring – Tyler Cameron. Notably, Tyler’s a fan-favorite, and Chad’s anything but. So, clearly, Bachelor Nation fans will root for Tyler.

Chad’s got a beef with Tyler Cameron. Recall, they didn’t star together on the same season of the show. But, he certainly knows Tyler. He revealed his issues with Tyler while talking on the Hollywood Raw podcast. When he got into trouble for domestic violence, Tyler got ahold of Annalise Mishler and noted if she needed anything, he’s there for her. Some people might think Tyler made a nice gesture. But for Chad, he’s just super-angry about it. He said of Tyler, “I’ve gotta f–king beat your ass.”‘

Bachelorette alum, Chad seems rather proud and full of himself since he inked the deal. He told fans on Twitter, “A lot of people question my vision and say that I need “help”. Sit back down on your couch and watch me.” He apparently knows “exactly” what he does with his life. “Don’t question my vision. Just watch and enjoy the ride motherf–ker, this is gonna be huge,” he said. On his post where he shared about fighting Tyler, many of the comments came under the ones hidden for offensive content. Not a lot of people seem happy with Chad.

Tyler Cameron said nothing at all about the Celebrity Boxing challenge on his social media. Whether he takes up the challenge by the Bachelorette alum or not, no doubt comes via a statement in the near future. Would you enjoy seeing a fight between the two men? Sound off in the comments below.