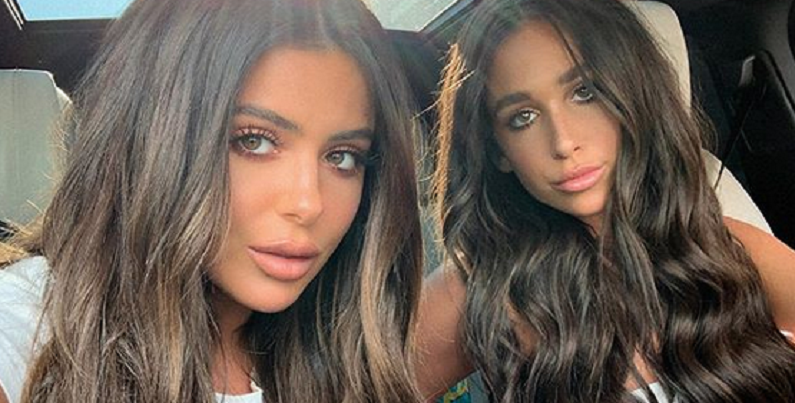 Brielle and Ariana Biermann look almost identical in their new photo. Fans were unable to tell them apart in the new photos posted to Brielle’s Instagram account on Wednesday, June 10. It’s clear that Brielle resembles most of her family members.

Previously, fans noticed how much Brielle and her mom, Kim Zolciak-Biermann, look alike. They look like sisters rather than mother-and-daughter. It’s clear that Kim looks great. She turned 42 last month and she’s had six kids. And she’s been showing off her bikini body on social media. Brielle and Ariana shared a rare sisterly selfie that had fans seeing double.

Per Hollywood Life, Brielle and Ariana Biermann shared their new selfies on Brielle’s Instagram page. In the first photo, the sisters sit next to each other in the car with the sunlight on their faces. Before, the Biermann sisters rocked blonde hair. But the new selfie shows them both embracing the darker hair color.

Both reality stars wore their brown locks in loose waves. Brielle opted for a white T-shirt while her 18-year-old sister wore a white tube top with a sunflower on the front. The second photo is similar to the first, except that Ariana leans in closer to her sister. Both sisters are also rocking a full face of makeup that included contour, bronzer, and a pale lip.

Brielle tagged multiple hairstylists in the new photo. Their photo attracted over 74,800 likes and more than 500 comments. Of course, their mother was one of the first to comment on Brielle’s Instagram post. She simply wrote “my girls” with two heart-eyes emojis.

“I love you bobcat,” Ariana told her older sis, while adding a white heart emoji.

Brielle Biermann goes on a drive with her sister amid quarantine

Per Daily Mail, the Biermann sisters went for a drive amid the quarantine. It appears that they wanted to take a break from the social distancing lifestyle. This revelation comes after Kim told Andy Cohen on Watch What Happens Live @ Home that they both got Botox and fillers amid the coronavirus pandemic. Businesses started to open up in Georgia, and the mother-daughter-duo were their first two patients.

Kim admitted that she got Botox injections. She also revealed that Brielle got some work done on her lips. Earlier this year, the 23-year-old said she dissolved. However, she gets lip fillers every so often. Back in 2015, the then 18-year-old admitted that her lips were her “biggest insecurity.”

HAPPY BIRTHDAY to my best friend / best mom ever / lover ♥️ @kimzolciakbiermann i love you more than chickfila.. that’s a lot 💕

Brielle previously told People that she wants a natural look. She also addressed her striking resemblance to her famous mother.

“I’m just trying to differentiate myself a little bit,” Brielle said. “It’s always been like, ‘Oh, little Kim.’ That’s who I am. I look just like my mom. Always have. I mean she’s gorgeous, but somebody’s got to start looking a little different at some point.”

The reality star embraced a darker hue, so she could look less like her mom. She’s finding her “identity” and wants to “start looking a little different.”

What are your thoughts on Brielle and Ariana Biermann’s striking looks? Sound off below in the comments section.