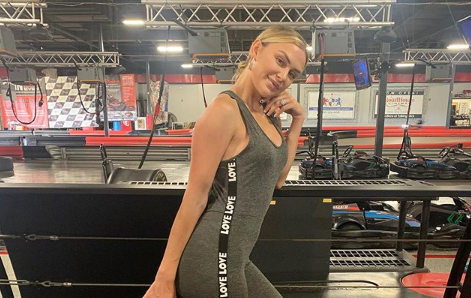 Lala Kent addressed her very public feud with 50 Cent during the reunion. Andy Cohen asked why it didn’t play out on the eighth season of Vanderpump Rules. For fans who don’t know the beef between the two was very public and resulted in several posts on Instagram.

He claimed Lala’s fiancé Randall owed him a million dollars. On the post, he made to Instagram he demanded his money within 48 hours and then shared clips of Lala. He called her out for being drunk and trolled her relentlessly. The debt was allegedly from a production he and Randall had worked on together.

Look at these young kids right here. This is our future. It’s up to us to educate our youth. It’s a delicate subject that needs to be a conversation, no matter how uncomfortable it may be. I am so thankful for what I’ve been allowed to be a part of the past few day. Today I witnessed love. I witnessed people coming together for change. People coming to defend the lives of our black brothers and sisters. I’m so damn proud of everyone out there, marching and protesting. Let’s keep it up until we see the change that must be made. Let’s keep our voices raised & our presence known. & please stay safe, my loves. #BLACKLIVESMATTER

Why Was Lala Kent Mad At James Kennedy?

Lala Kent said, “I mean, I won’t say more than I can. There was a very public beef between myself and a pretty famous rapper, and it got very bad. I felt like James and I had moved so beyond doing petty s— to each other that when I saw that it was just like a knife in my heart.”

When he shaded her on Instagram, he made fun of her clothes and said, “fofty said leave it,” according to All About The Tea, James and Lala have been in a relationship in the past and that friendship ended when she and Randall got together. James has had some trouble with alcohol and seemingly regrets a lot of decisions he made in the past.

The post James Kennedy made about the feud made fun of Lala. He apologized for the post. Kennedy said, “This is a long string of things that, you know, I wasn’t proud of. Why did I make that petty remark? Because I had to fulfill some kind of inside thing while I was out with everybody.” He went on to say he sees how dumb it was.

Lala said it didn’t play out on the show, because they weren’t filming at that time. She said, “I think we would have had a much harder time if it was happening during filming. But there was also a lot of legal stuff going on that…yeah.”

Everything Is Okay With The Rapper Now

Lala Kent said everything is great now. She said, “myself and Randall and this rapper, we just don’t speak about each other.” The feud seemed brutal, at the time, but both parties moved on.

Andy Cohen asked 50 Cent when he was on the show if he regretted the dispute. He said, he did not. “It got me paid right away,” he said according to People. He also said he didn’t have a problem with them. After it was confirmed the money got to him, he removed the posts, ending the argument.

Make sure you don’t miss new episodes of Vanderpump Rules on Bravo.

‘LPBW’ Josiah Roloff Way Ahead Of His Age, See Latest Feat
Poor Rayne Waldrop’s Hair Almost Gets Ripped Out Of Her Head?
Anna & Josh Duggar Net Worth Plummets After Scandal & Conviction?
Lifetime’s ‘Trapped With My Husband’ Part Of LMN’s Unhappily Ever After
Anna Duggar Makes A Long-Overdue Life Change