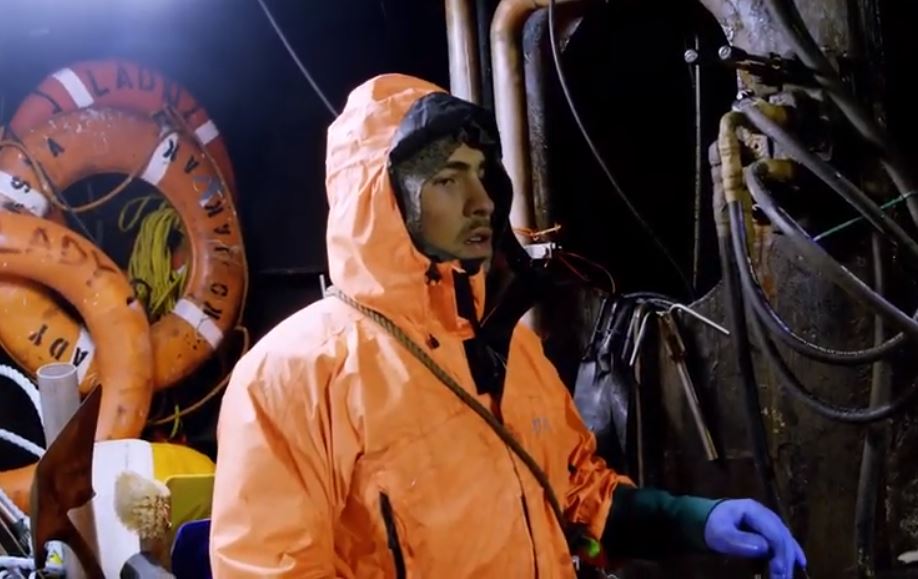 On tonight’s electric episode of Deadliest Catch, we are off the F/V Seabrooke and onboard the Lady Alaska.  But it’s hardly smooth sailing in the roiling Bering Sea.

We open on deck with Scott Campbell Jr.s (Junior) crew, and someone is failing at their job.

James Gallagher is the rookie engineer, and Junior, the nickname for Scott Campbell Jr., is seen and heard losing his patience as one lethal mistake after another is threatening the deck of the Lady Alaska sailing out of Kodiak, Alaska.

Namely, it is the flying 800 pound metal pots which are seen swinging in the air, as all the crew on deck are in grave danger. James is learning the hard way that this is not the time to be learning these skills in real time on the job.

What happens on Deadliest Catch tonight?

Our TV Shows Ace exclusive preview opens with narrator Mike Rowe explaining the action at night aboard the Lady Alaska.

Junior explains what he is trying to accomplish.  He says: “You have to tie it up against the wind. The buoys are laying up a**-backwards… everything is just backwards. He adds: “And James doesn’t have a lot of experience. He is trying…”

Suddently in the filmed action, we see disaster strike as the huge metal pot is suddenly swinging and loose. It heads backwards towards the men on deck, endangering their lives.

Watching from up above, Junior explodes and says: “James, watch it, watch it! I swear to God, James, I’m gonna wring your neck. Somebody could get killed. I mean…that pot came all the way past the table.”

He adds: “A seasoned guy on the hydraulics would have never done that.”  The crew are watching what happens as James is dressed down by Scott, and then given orders to lend James a helping hand so that no more mistakes happen.

But it is a little too late in the game. They are tired, cold and wet and ill-equipped to deal with a novice in the middle of a rough sea while working.

Frustrated and visibly angry, Junior is fuming and says: “There’s certain times that you can take the time to teach somebody. This isn’t one of those times. You should be able to handle that. James.”

As the clip progresses, the pot in play is shown at the end of our exclusive preview swinging back and forth.  In the sketchy retrieval process it injures a deckhand trying to stop it and secure it to unload the contents.

Junior is now at his wit’s end. He says: “Are you kidding me?”

Today was the first day that one of the lakes reopened in Idaho. I took my granddaughter out for a little spin on the…

Junior is much more than just a fisherman. The busy family man and entrepreneur is a book author and business owner in Idaho.

Currently, he is enjoying his downtime in Meridian, Idaho fly fishing, but on tonight’s epic Bering Sea adventure, Junior is shown trying to keep his entire crew alive and from chucking James overboard.

This clip is a perfect example of what Wild Bill told me in our exclusive TV Shows Ace interview, that crabbing is one of the most dangerous jobs in the world: