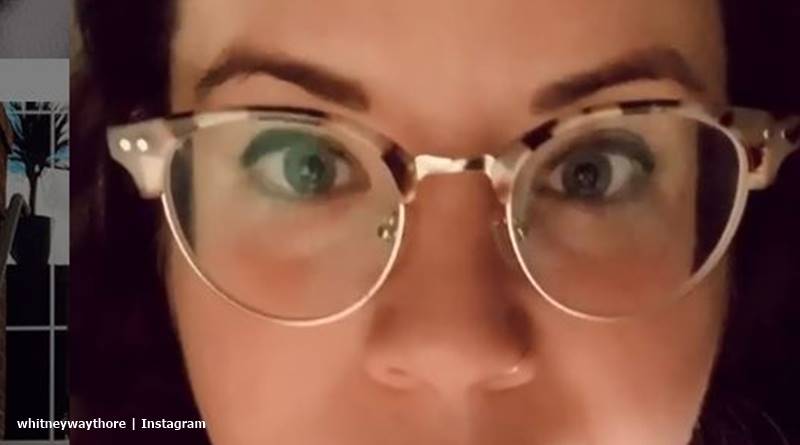 Whitney Way Thore of My Big Fat Fabulous Life split from Chase Severino. Some fans already suspected something went wrong as she never updated her wedding plans on The Knot. Maybe she never got around to that because she apparently lined up a slot on Say Yes to the Dress.

Whitney and Chase broke up. Plenty of fans noticed, in retrospect, that the My Big Fat Fabulous Life star never updated her wedding details. On The Knot website, nothing even featured under the “Registry Page.” Fans believed that showed their relationship really was as fake as many people suspected. However, news came out that Whitney nearly married Chase in a dress from the Say Yes to the Dress show. The information came via Instagram.

Whitney Way Thore shared that the show canceled her. Not because she split from Chase, but because of the coronavirus. The Sun UK reported that the info about the cancellation of the show came via Instagram Stories in March. So, that’s way before the news broke that Chase fathered a baby, and Whitney won’t marry him. The outlet noted a fan asked her directly about the Say Yes to the Dress show. But, Whitney replied, “Unfortunately, COVID-19 canceled that shoot. It was supposed to be next week.'”

In retrospect, that cancellation might be a good thing

Whitney seems embarrassed enough about the split from Chase Severino. Probably, what seemed like bad news at the time, seems like a godsend now. After all, she possibly feels that at least the show not filming, prevented more invasion of privacy. The announcement about the failed engagement emerged on May 22, directly via Whitney’s Instagram. She told her followers that Chase expected a baby with another woman.

Fans of Whitney Way Thore already guessed something went wrong. For some time, rumors of the pregnancy floated around Instagram and Reddit. Whitney asked for privacy about the sad story, saying she won’t hear any hateful gossip on her page. She noted, “I would ask for privacy for all involved as we move on and focus on the future.” But interest remains high, and ten days on – a lifetime in newsworthy gossip – outlets still talk about the split.

My Big Fat Fabulous Life star remains in the news

Life & Style, Extratv, People.com,  and more, bring out followup stories about the My Big Fat Fabulous Life drama. Daily Mail UK reported that Whitney shared that her friend, Buddy Bell stays with her at the moment during the quarantine. She seemingly takes some comfort from that.

What do you think about Whitney Way Thore missing out on a chance at starring on TLC’s Say Yes to the Dress? Do you agree that the way things turned out, it’s probably for the best? Sound off in the comments below.