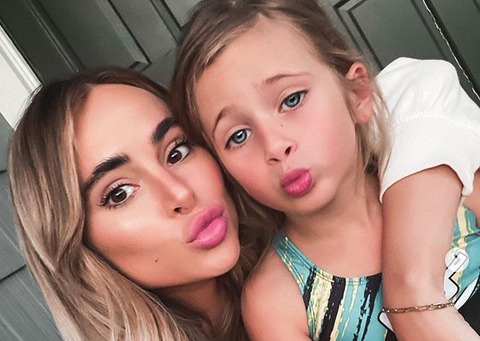 Former Bachelor in Paradise star Amanda Stanton attended protests on Wednesday, June 3 to take a stand in the Black Lives Matter Movement. Following the protest, she posted a picture on Instagram of herself protesting with her six-year-old daughter, Charlie. While some fans supported Amanda’s decision to bring her daughters with her, others say that she should’ve left the girls at home.

Amanda posts about the protest

Amanda took to her Instagram story to share a video of her daughters, Kinsley and Charlie, making signs for the protest. One sign read, “Black Lives Matter.” Amanda added the tag, “#blm,” to her story.

About an hour later, the Bachelor in Paradise alumnus posted a picture from the protest on Instagram. It featured Amanda and Charlie wearing masks and holding up signs.

Many fans commented on Amanda’s post, saying things like, “This just made me cry LOVE THIS,” and “Good for you for taking your child there!” The former Bachelor in Paradise star replied to the supportive comments with thank yous and heart emojis.

However, not all users felt that Amanda made the right decision. One concerned user said, “While I support the protesters for justice for this senseless murder. I can’t wrap my head around bringing children.” This comment started an argument among fans. Some explained that Amanda is a good mom and was likely looking out for her daughters’ safety throughout the protest. Others say that while this is true, it’s hard to tell when a peaceful protest will turn violent.

The Bachelor in Paradise alum responds to fans

After seeing the comments that fans left, Amanda replied to explain her decision to bring her daughters with her. She told users that she was cautious and checked out the protest before attending with her daughters. She said that she felt safe the entire time they were there. The Bachelor alum noted that the protest was peaceful. She adds that she wouldn’t have brought her daughters into an unsafe situation.

Unfortunately, somebody drove their car through the crowd during the protest. Thus, fans say that the protest wasn’t peaceful or safe. In response, Amanda writes, “Maybe instead of hating on me for teaching my kids to exercise their right to protest and use their voice, you should hate on the person who drove their Mini Cooper through a crowd.”

To be sure that her intentions weren’t misunderstood, the Bachelor in Paradise star reiterated these statements on her story. She assured fans that she prioritized her kids’ safety when she made the decision to go to the protest with them. Amanda tells fans that she followed these five tips for safety: abide by social distancing guidelines, be aware of surroundings, stay close to your children or hold them, dress comfortably and don’t carry a purse, and follow the government’s rules.

Amanda followed this post up with one more picture on her story. In it, she writes, “I understand not everyone is comfortable protesting or bringing kids and I totally understand that!” She continues, “It was a decision I made so they could learn from an early age to use their voice and exercise their rights to stand up for something that’s so important.” The Bachelor alum is strong in her decision and won’t be swayed by critics.

Would you bring your kids to the protests? Do you agree that it’s important to let kids share their voice as well? Let us know in the comments.