Hannah Brown accused her brother Patrick of being the one who actually said the “N-word” during her Instagram Live video.

Hannah Brown sang the ‘N-word’ on Instagram Live and tried to place the blame elsewhere.

As we’ve previously reported, the Bachelorette alum is not in a great place right now. Many are furious with her after she said the “N-word” while singing during an Instagram Live. As those who have seen the actual video footage know, she was called out by those watching the live. She, however, seems shocked to be accused of saying the word.

So, some Bachelor Nation fanatics cannot help but wonder… What is going on over at Patrick’s profile? Did he address his sister blaming him for saying the word? Are people criticizing Hannah on his profile?

Well, we decided to take a trip over to Patrick Brown’s Instagram profile. And, you might be a little surprised by what you’ll find in the comments.

Fans of Hannah B quickly flocked to Patrick Brown’s most recent Instagram post. While the post had nothing to do with Hannah, the comments were flooded with chatter of her. There, however, didn’t appear to be any trolls. Those posting had nothing but kind things to say. In fact, most seemed to be taking Tyler Cameron’s advice and lifting Hannah up instead of putting her down.

Here’s some of what people had to say in Patrick’s comments:

Fans of Hannah Brown understand things will NOT be easy for her until the dust settles. They, however, hope Patrick Brown will find a way to lift his sister up and support her.

Patrick responds to the requests with a sweet photo.

While Patrick Brown did not respond to any of the comments on his profile, it is safe to assume he noticed them.

Just a few hours ago he took to his Instagram Stories. He shared a sweet photo of his sister and himself in an embrace. He noted that he loved his sister and he was her biggest fan. 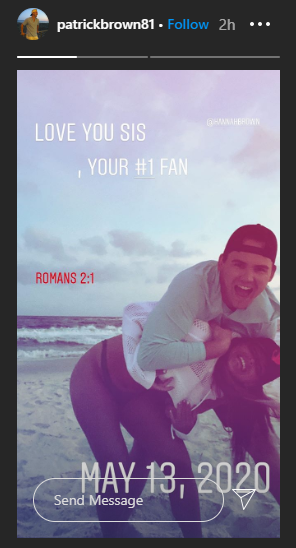 Do you think Patrick Brown will do what he can to lift his sister up during this time? Share your thoughts with us in the comments down below.