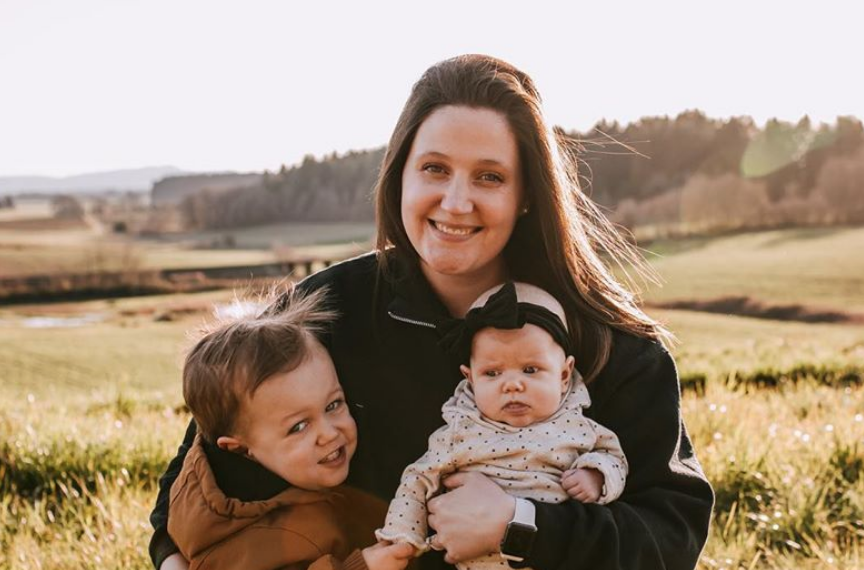 In a new social media post on Tuesday, Tori Roloff of Little People, Big World reveals that her daughter Lilah is six months old. The LPBW mom posts a few milestone photos of her daughter. She also talks about what Lilah likes and the milestones she’s reaching.

In the first couple of pictures, Lilah is laying on a milestone blanket. The blanket has the numbers 1 through 12 on it and the word “months” as well. Each month, Tori places a flower beside the number of months Lilah is. So, because Lilah is now six months old, the flower is beside the six. She’s wearing a black and white outfit, shoes, and a bow. She’s even smiling for the pictures.

The other pictures of the LPBW baby feature her sitting on a chair. Beside her is a wooden milestone sign, which also says that she’s six months. In one of the photos, Lilah is attempting to taste one of the signs.

In the post, Tori reveals that Lilah is now “rolling and scooting.” Lilah has also started eating solid foods, but she isn’t a fan of them so far. Tori adds, “Girlsie loves bath time and being in the car! She loves being sung too. Home girl is obsessed with her brother still. ” Then, the LPBW mom mentions how much she loves seeing Lilah grow.

The family seems overjoyed to have little Lilah is their lives. She’s often smiling and seems cheerful in the pictures and videos that Tori shares with her social media followers. Of course, fans love to see the frequent updates about both Lilah and her three-year-old brother Jackson.

1/2 way to a year already?! The last 6 months have flown by. I feel like we’re finally hitting our stride with this girl and we get more smiles than tears (most days) Lilah is rolling and scooting everywhere!! I left her in her room the other day for two seconds and found her under stool inspecting grandpas handy work.🌀 Lilah started solids this week and hates them. So that’s fun haha 🥑 She loves to grab everything. 💪🏼 Girlsie loves bath time and being in the car! 🛁 🚙 She loves being sung too 🎶 Home girl is obsessed with her brother still. 👦🏻 Also yes. The tongue is always out. 👅 We love you Lilah girl and love watching you grow every day!! 💕 #babylilahray #zandtpartyoffour Catch a brand new episode #LPBW tonight on @tlc and see this little bean make her debut!!

The Season 20 finale of Little People, Big World premieres on Tuesday, May 19. In this episode, the family celebrates Lilah’s arrival. She meets all of her family members for the first time. Jackson isn’t so sure about his baby sister at first. The family seems to adjust well to having two kids instead of one.

Even though Lilah is already six months old currently, the show was filmed months ago. So, that’s why fans are just now being introduced to the baby on the show. Thanks to social media, fans have been able to see Lilah and the rest of the Roloffs whether the show is filming or not.

So, can you believe that Lilah is already six months old? What do you think of those sweet photos? Share your thoughts in the comments below.

Don’t miss the season finale of Little People, Big World on TLC on Tuesday, May 19!

‘LPBW’ Matt & Jacob Roloff Team Up On Another Huge Project
Tia Booth’s Fiance Gets Real About Relationship Struggles
WWE Network: Schedule Update for June 20-26
Duggar Sisters Visited Jinger Out Of Convenience Not Desire?
Where Will Anna Duggar Be For Her 34th Birthday?