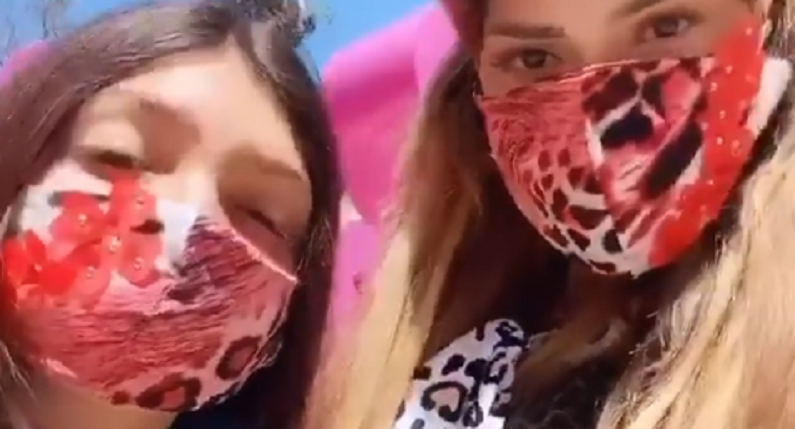 Teen Mom alum Farrah Abraham previously caused controversy over the coronavirus pandemic. She cracked jokes about the global pandemic. The reality star told her followers that she “loves coronavirus season” because everyone else is at home. Of course, her followers didn’t like her controversial statements since people are dying from this invisible virus.

She also wore fashionable face masks with her daughter, Sophia Abraham. Farrah is not letting the pandemic let her stay at home. Instead, she wants to cash in on it. Farrah shared a new video of herself and Sophia wearing some inappropriate masks.

Per Starcasm, Farrah Abraham and her daughter Sophia wore face masks that are inappropriate for children. The mask features a picture of a rooster with the word “block” written underneath. Amazon calls it the “C Block Mask” and it’s in reference to the phrase “c**k block,” which is an adult joke.

Farrah shared the video of herself and Sophia wearing the “masks by Farrah” that’s available for sale on Amazon. But the “C Block” mask is inappropriate for her 11-year-old daughter. Her Instagram post also caused controversy with her followers. Farrah wrote that wearing a face mask is like wearing a “burka … it’s my religion.”

The MTV star has a full line of masks available on Amazon. Not all of them are inappropriate. Some of them feature flowers, lips, and other colorful prints. It’s unclear why Sophia modeled the one that’s specifically made for adults. Some of Farrah’s followers noticed similarities between the “Lips Mask” and a Balaclava knit top created by Gucci that the company.

They also noticed that her tie-dye mask is the same as the tie-dye Reinder outfits that Farrah and Sophia were last month. It’s unsure whether Farrah partnered with the brand on her line of masks.

Farrah Abraham wants to push her daughter into the entertainment industry. Sophia released two songs and has taken an interest in acting and modeling. Just like her mom, Sophia has become an “influencer” on her Instagram page. Farrah’s followers think she’s the one behind her account. However, it’s unclear whether Sophia’s Instagram account is run by her mom.

Sophia shared a throwback photo from a magazine cover that featured herself and Farrah. While the interview took place during the early days of Teen Mom, Farrah still owns the magazine to this day. The caption included the phrase, “Best teen mom ever!!!”

#tbt I love when my mom shows me cute photos of me as a baby & their in magazines… I don’t read physical magazines but great memory on @lifeandstyleweekly I’m proud of my mom and all she’s stayed strong through go mom! Best teen mom ever !!!

That Instagram post in question had followers wondering who runs Sophia’s Instagram account. Some took to that post to ponder whether Farrah wrote the caption herself. They noticed that the language is identical is some of her own Instagram posts. Others said that the vocabulary isn’t something that an 11-year-old would use. Because it is Farrah’s daughter, people aren’t as shocked though.

What is clear is that Farrah Abraham is super supportive of her daughter Sophia. What are your thoughts on her new line of face masks? Sound off below in the comments section.