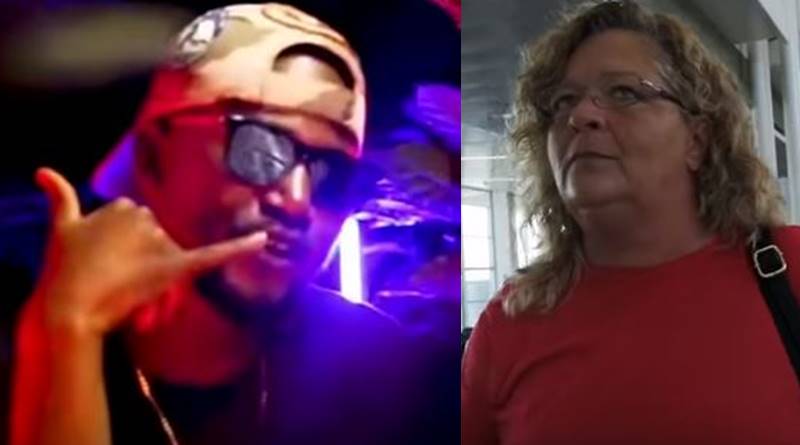 90 Day Fiance fans know that Lisa Hamme’s really aggressive with bloggers and fans who disagree with her. And, now that leaked footage of the Before The 90 Days Tell-All got revealed, they see she also gets aggressive with the producers. In fact, she came out totally disrespectful of the Tell-All host, Shaun Robinson.

Ever since her debut on the show, Lisa came out firing at anyone who disagreed with her. Freely using the F-Word, which seems a bit off for an elderly woman, she slammed people often. Plus, she blocked them liberally. Bloggers seem her favorite target. TV Shows Ace reported that Lisa even “offered a bounty reward” to help hunt down a blogger she disagreed with. In fact, critics felt she openly “doxed” the blogger.

Additionally, her liberal use of the N-word got people so angry some of them started a petition for her removal from the show. But now it looks like Lisa disrespects some of the producers of the TLC show as well. The leaked footage of the Tell All shows her and her Nigerian lover dissing on Shaun Robinson. Interestingly, the unedited leaked footage came from Sharp Entertainment who produce the 90 Day Fiance Tell All. @fraudedbytlc dropped that nugget of information on their Instagram Page.

Lisa Hamme swears at Shaun, tells her to ‘shut up’

Monsters and Critics reported that in the Tell-All, unclassy Lisa continues her rather unappealing way with words. They noted that she actually told Shaun to “shut up” and called her a “b*tch.” The outlet explained that Lisa lashed out at Shaun over her questions about “blocking” Usman. Several times. she told Shaun to “shut up,” accusing the host of talking over her. But perhaps Lisa, being elderly, doesn’t get that there’s a time lag on remote conversations.

Nevertheless, calling the host a “b*tch” seems a bit extreme, fans think. Over on Twitter, lots of people expressed their disgust and shock over Lisa’s behavior. One person noted to another fan who missed it, not to bother watching the leaked footage. They noted, “You didnt miss anything. 10 hours of Lisa saying ‘f’ this and ‘f’ that. She wouldn’t let anyone else talk.” One person noted that Usman also got disrespectful. They shared a short clip of the 90 Day Fiance star yelling at Shaun.

More unedited tell all footage. This is Lisa & Usman BOTH being rude & disrespectful to the host Shaun Robinson. #90DayFiance pic.twitter.com/IW2CcVA6R3

And there’s more footage which you can see below. One fan noted, these two, Usman and Lisa probably deserve each other as they’re both as bad as each other. They shouted over Shaun who tried explaining everyone gets their chance to talk. It’s clear Shaun’s trying to reason with everyone, but neither of them will shut up. And, Lisa eventually said the F-word to Shaun.

Lisa demanding production cut Shaun Robinson off for being “disrespectful” to Usman. Part of the tell unedited leak. #90DayFiance pic.twitter.com/L90uBMjJfw

One follower wrote, “Lisa makes Angela Deem look and sound like Queen Elizabeth…Angela brings drama to Tell Alls, but this is disgusting. Old woman needs to wash her mouth out.” What do you think about Lisa swearing at Shaun Robinson during the 90 Day Fiance Tell All?