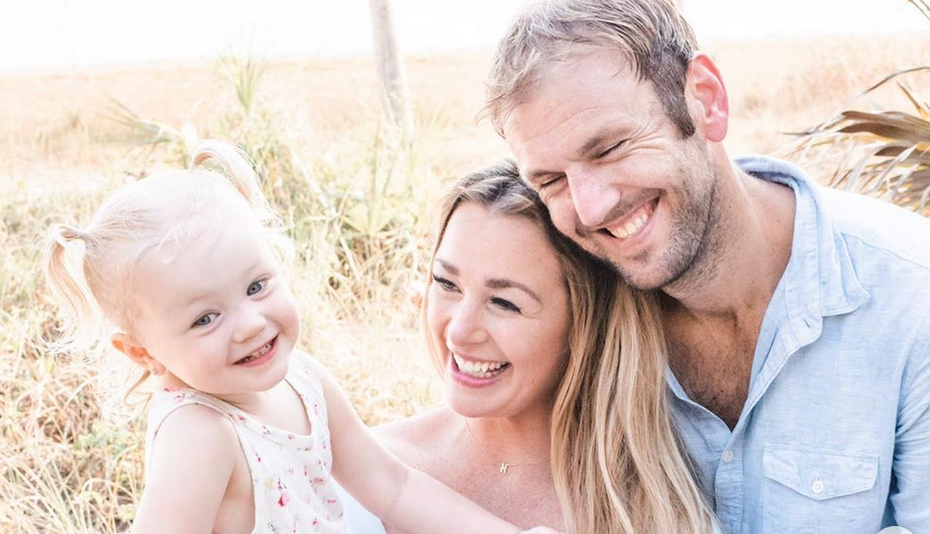 As of Monday, Jamie Otis is 39 weeks pregnant. She’s due on May 11. The Bachelor and Married at First Sight star is expecting her second child, Hayes Douglas. She and her husband Doug Hehner, who she met on Married at First Sight, share a two-year-old daughter, Henley. On social media, Jamie recently shared a new bump update. But, it’s a little different from the ones she has been sharing.

In the two pictures, Jamie is standing nude in front of a window. One of the pictures is in black and white while the other is in color. Jamie’s looking down at her 39-week belly.

In response, her social media followers love her new post. They think that the pictures are very beautiful. Her followers also take the time to wish her well. Jamie is having a home birth due to the coronavirus pandemic. She doesn’t want to risk getting the virus and she doesn’t want her baby to get it either. So, the couple decided that a home birth is the best choice for them.

In her post, Jamie talks about the symptoms she’s been dealing with lately. She writes, “I promised God I wouldn’t complain about any pregnancy pains if he’d just let me keep this baby.” Jamie previously had two miscarriages. She and Doug also tried to get pregnant with their second child for 18 months. So, the couple is thrilled to almost have this baby boy in their arms. Jamie doesn’t want to take the pregnancy for granted, despite the uncomfortable symptoms she’s dealing with.

Then, Jamie continues, saying, “I wont complain about the waddle🐧 , the Hemerrhroids😳, the fatigue😴, and back pains🤪 – God’s kept his promise and I’m keeping mine!🙌🏼💗⁣”

I promised God I wouldn’t complain about any pregnancy pains if he’d just let me keep this baby.🙏🏻🤰🏼 Monday I am 39 weeks pregnant!!! I wont complain about the waddle🐧 , the Hemerrhroids😳, the fatigue😴, and back pains🤪 – God’s kept his promise and I’m keeping mine!🙌🏼💗⁣ ⁣ If there’s one thing I wish I could go back and do differently, I’d put more effort into bonding with @babyboyhehner throughout my whole pregnancy…⁣ ⁣ I’ve held my breath from the moment the fertility specialist said I’m pregnant. I tried my best not to show my fear bc I only wanted to put positive energy out for this sweet baby boy growing in my belly.👶🏼🌈⁣ ⁣ With each pregnancy milestone I felt more and more confident we wouldn’t lose him, but I never felt “safe” to just let all my guards down…which unfortunately prevented me from truly bonding with him.😔 ⁣ ⁣ I’m really hoping to deliver my own son. I want to pull him out and bring him up to my chest and just LOVE on him.🙏🏻 I can’t wait to smell his newborn scent & stare at the wonder of his tiny toes. I am so excited to have a home birth and have the opportunity to have the calmness of my own home so that I can bond and connect on a deeper level with our baby Hayes.🙏🏻🤰🏼👶🏼🌈

She writes, “I’ve held my breath from the moment the fertility specialist said I’m pregnant. I tried my best not to show my fear bc I only wanted to put positive energy out for this sweet baby boy growing in my belly.” Jamie Otis then goes on to mention how she never feels like she got a chance to bond with her baby boy on the way. She says she wasn’t able to let her guard down, even though the pregnancy milestones continued to come. Everything was pretty normal throughout her pregnancy and the baby is in great shape, but she never felt “safe,” due to her previous losses.

Fortunately, things are still going smoothly. It sounds like Jamie and Doug will have a baby boy any day now. So, be sure to check back for updates and a baby announcement.

So, do you think Jamie and Doug’s baby will be here soon? Or, will they have to wait a bit longer for his arrival? Leave your guess in the comments below.

Kendall Jenner’s Abs To Die For In Recent Selfie
‘Teen Mom’: Jenelle Evans’ Ex Busted By Cops, Arrested For What?
Brian Austin Green & Sharna Burgess Welcome 1st Baby Together
‘One Piece’: How Many Seasons Are On Netflix?
Who Will Be The ‘Stranger Things’ Hinted Death In Volume 2?