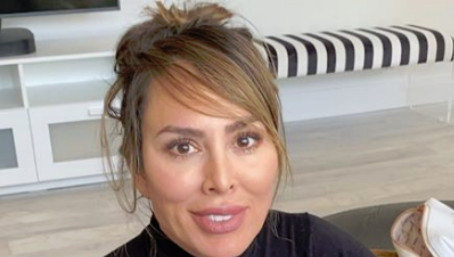 The Real Housewives of Orange County star Kelly Dodd is the latest Bravolebrity to put her foot in her mouth over the coronavirus pandemic. While defending herself for flying cross-country during the stay-at-home orders. Kelly had been in NYC with her fiancé, Rick Leventhal but flew back to California.

The first strike against Kelly came when she posted a series of videos of her getting the coronavirus test done when she got to California. The test involves a very (VERY) long swab inserted in the nostril.

In one video, Kelly can be heard screaming as the swab is inserted. She wrote, “That hurt” on one of the videos. Since the videos were posted on Instagram Live, they’ve since expired and disappeared.

Kelly Tussles With Fans Over Flying During Pandemic

But it was another post that got Kelly in deeper trouble. The RHOC star shared a meme from the movie Step-Brothers. The meme asks, “are you saying pan or Pam?,” referencing the pandemic.

Many fans laughed at the meme, saying they loved the movie. Others took the opportunity to call Kelly out for flying, especially if she’s having symptoms of coronavirus.

In response to fans questioning why she was flying, Kelly retorted, “Why are the airlines still flying” if it’s so dangerous?

According to Kelly, the people who died from coronavirus this year would have died anyway from something else. She responds to a fan’s comment by saying it’s just “God’s way of thinning the herd.”

Kelly offered some advice: if you’re vulnerable or sick, stay inside. It’s “common sense!” she wrote.

@kellyddodd expresses her regrets for the statement made earlier. She flew back from NY yesterday after a lengthy stay. Was her trip essential? Should she have stayed home with her daughter Jolie? Just because you apologize, does that make it okay? What are your thoughts? — — #kellydodd #rhwwrh #rhoc #coronavirus #rickleventhal @rickleventhal #thintheherd

The RHOC star isn’t the first Bravolebrity to cite God as the reason for coronavirus. In March, her RHOC co-star, Vicki Gunvalson, equated the coronavirus to a bad flu. She also said that God has already planned everyone’s time of death, so she “doesn’t care.”

That same month, Vanderpump Rules star Jax Taylor suggested that the coronavirus is God’s punishment for our bad behavior. He cites the climate and how we treat people as a few of our wrongs that needed correcting.

Kelly Apologizes, Says She Was Just ‘Asking a Question

The backlash to Kelly’s original comment was swift and severe. Within hours, media outlets, such as People, reported the RHOC star’s words. On Tuesday morning, Kelly took to her Instagram Stories to apologize. In a series of videos, the reality star explains she didn’t mean what she said.

The RHOC star backtracked by saying, “That’s not what I meant and I want to apologize to anyone that got offended, okay? I’m sorry.”

She went on to say that it was a stupid thing to write, but she was just asking a question. Kelly insists that she “feels bad” for everybody who has lost loved ones from the virus. And she hopes her fans can forgive her for “saying something so ridiculous and so stupid.”

Tell us in the comments what you think about Kelly’s thoughts on coronavirus and her apology.