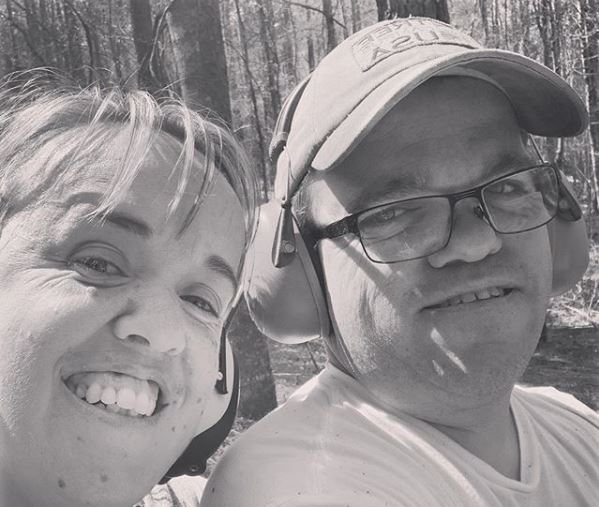 This week’s April 21 7 Little Johnstons episode, “It’s a Boy,” had everything any faithful fan could long for– and a puppy!    The star of the family and for this week’s hour was indisputably their little miniature dachshund, Cruiser, so named by Elizabeth.  “Who’s going to pick up the dog?” Trent Johnston called out.  “All of us!” Amber replied.  Every member of the 7 Little Johnstons made the two-hour ride to welcome the little “chocolate” pup.  Amber went on an exhaustive search to get another dachshund for her brood.  She wanted “a little chocolate dog” to match their big chocolate dog, their Labrador Jessie.

In between all the puppy love, the 7 Little Johnstons had a grand time getting a lesson in making “slime” from Emma.  There was another session of speech therapy for the youngest daughter, along with some comedy improvisation that didn’t go so well in getting Emma past her anxiety in group speaking.  When it came to the kids at art and science camp, however, Emma got her point, and the gooey concoction, across just fine.

‘7 Little Johnstons’ take a trek to get Cruiser

Elizabeth was the driving force in persuading her parents to get another dachshund.   Anna and Amber both described how they have “short arms, short legs, long torsos, and big bellies” making them just like little people.  The forever pet crush fell over the 7 Little Johnstons the second they looked at the sweet nugget.  Elizabeth clearly is already possessive, but she will share. She already declared that “Cruise,” as he is called for short, “is the best dachshund we’ve had.”

Besides preparing for the puppy’s arrival by rolling up the living room carpet, Trent had “some smart-a** parenting” in play.  He described how hiring “a professional dog trainer” actually trained his teenagers to take care of the dog.  The trainer praised the “confident little puppy” as she walked the kids through some basic commands and obedience skills.  She instructed that whenever Cruiser went potty—number one or two– it should be a “have a party” kind of praise.  Alex really took her words to heart.  Amber and Trent were hilarious as they mimicked their son’s enthusiasm.  The 7 Little Johnstons were all like first-time parents again, gushing over bodily functions.

The slime is slinging for ‘7 Little Johnstons’

The whole family joins Emma for a riotous lesson in making “slime.”  Instructors are all over YouTube, but none have Emma’s playful spirit.  Amber had great concern for the dining room table and her “$25 placemats,” but Trent had already dribbled his yellow slime onto his pants, much to the glee of the kids.  They told their dad that slime definitely doesn’t wash out.

Emma insisted that her dad and Anna didn’t do so well with making the gooey stuff, but everyone else took their blobs outside and had a great time flinging them over and around each other.

This was a practice run for it Emma, who is going to lead a lesson for the kids’ camp.  Since Anna will be leaving for college, Emma will be stepping in to help out.  Before her classroom debut, the family arranges some preparation.

Comic relief not so relieving and revisiting Ms. Tiffany on ‘7 Little Johnstons’

7 Little Johnstons creates so much humor and harmony, it’s hard to imagine that the family needs any help from a working comedian.  They want to do anything possible to help Emma relax and communicate, but they admit that they still step in and answer for her when they should allow her to respond on her own.

A session at a comedy improv club brings a lot of laughs for everyone, including Emma, but doesn’t ease her stress when she’s put on the spot to respond in an alphabet letter game with her siblings.  The leader asks that no one answer for her, but her siblings are still guilty of “helping” too much.

Amber and Emma go to Ms. Tiffany for a return visit.   A session on expanding her vocabulary and language goes so-so.  For the first time, the therapist suggests that Emma’s problem goes beyond a lack of confidence, as Heavy reported in an April 21 preview, and is actually related to processing information.  She describes that Emma needs more time to discern information and formulate a response.

One great suggestion would be to rehearse some “go-to” replies and phrases as responses, at the same time Emma works on her expressive language and vocabulary.

Emma is a hit with the kids

The teacher at the kids’ camp, Mandy, doesn’t see Emma struggle at all in her slime lesson with the kids.  Children are incredibly perceptive and understand intent and sincerity beyond the words.  They also know always answer back, so that will keep Emma coming up with words of her own.  The experience could be a great confidence booster.  Her 7 Little Johnstons clan and millions of viewers will be cheering her through the summer.

Emma has another thing to look forward to at the little people convention in San Francisco.  The girls went shopping for new outfits, and the youngest sister couldn’t contain her excitement over seeing Luka again. Anna commented that “If it happens, it happens,” regarding a new boy, but she isn’t going to turn down any help from the gregarious and connected Luka in fixing her up.  7 Little Johnstons will probably be lighting up the City by the Bay.

🐶❤️ We can't get enough of @Trent7LJ showing some puppy love! pic.twitter.com/xZqAP9fuyQ

Cruiser is already getting a swim lesson by the end of this week’s 7 Little Johnstons.  Daddy Trent lovingly dries him off.  Precious fur makes a perfect ending to this week’s adventure for the family.