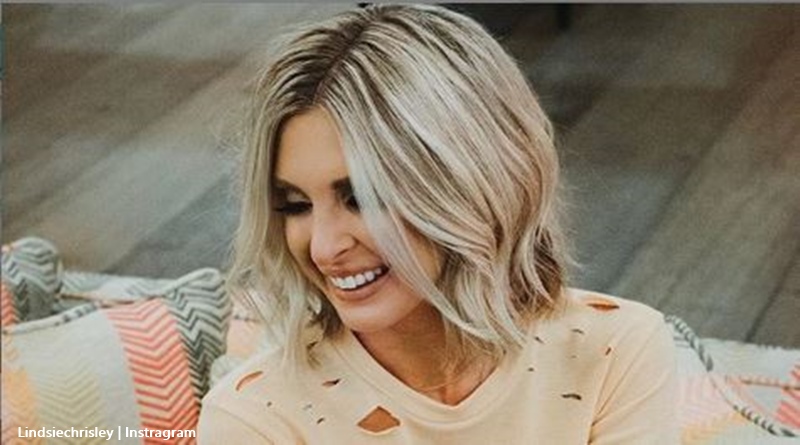 Typically, when we report on estranged daughter Lindsie Chrisley and her father Todd we’ve nothing good to say.

The duo are reportedly NOT on good terms. That, however, doesn’t mean that they aren’t still father and daughter. Moreover, that doesn’t mean Lindsie doesn’t still love her father Todd Chrisley (and vice versa).

Todd Chrisley recently revealed he was hospitalized with coronavirus.

As we previously reported, Todd Chrisley recently revealed he contracted the coronavirus. He was hospitalized and explained it was the “sickest” he had ever been in his entire life.

Chrisley Knows Best fans have been reassured that at this time no other members of the family have the virus. Todd Chrisley was kept at a safe distance and isolated in order to keep his family from getting sick as well.

Some fans of Lindsie Chrisley celebrated his illness and she wasn’t having it.

Lindsie Chrisley recently took to her Instagram Stories to speak out regarding her father’s diagnosis. And, it wasn’t the type of speak out some of her fans might’ve expected. Lindsie shared a screenshot of what she considered to be a “disgusting” message sitting in her inbox.

The message was from someone applauding her father becoming ill with COVID-19.

“Hi Lindsie! Did you see your Dad has Covid? I guess the good guys really do win in the end.” The message read.

The 30-year-old estranged daughter of Todd Chrisley was not having it.

“The audacity of some people blows my mind. This is disgusting. My inbox is flooding with similar messages & I’m not here for it. Get right or get off my page.” 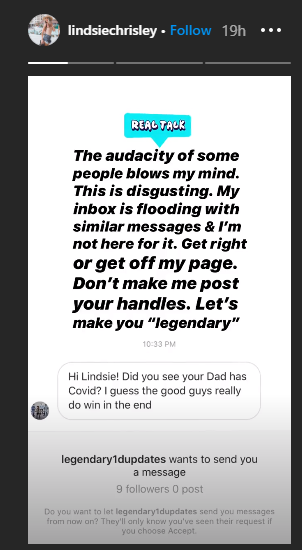 Lindsie also threatened the trolls sending her messages celebrating her father’s illness. She threatened to blast their social media handles and make them “legendary.”

Regardless of how things have played out between her and her father… She still loves him. Moreover, with this gesture, she makes it clear she’d never wish ill of him.

And, how is Lindsie currently doing amid the pandemic?

For those wondering and worrying… Lindsie Chrisley seems to be doing fine. She also shared an adorable selfie of herself on her Instagram Stories a few hours ago. She looked to be on her back on her bed. 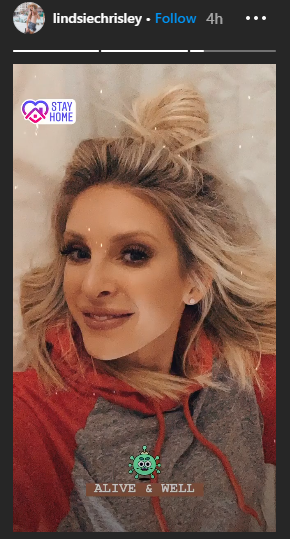 Her blonde locks were up in a loose bun on top of her head. Lindsie Chrisley describes herself as “alive” and “well.” “Stay home,” she also encourages her followers in her snapshot.

Does Lindsie Chrisley defending her father Todd surprise you? Sound off in the comments down below.