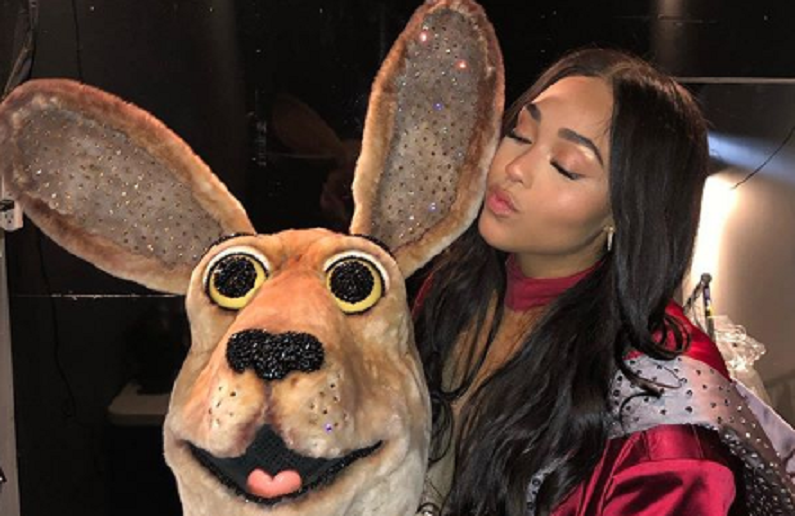 Jordyn Woods kept a big secret from her fans. She turned out to be the Kangaroo on Wednesday night’s episode of The Masked Singer. TV Shows Ace previously reported that she was one of the people who denied competing on the singing competition. But it turns out that she was the Kangaroo after all.

Viewers guessed correctly that Jordyn Woods was under the Kangaroo costume on The Masked Singer. Social media saw the clues from the beginning and were convinced. Find out what the model has to say about her reveal.

The Masked Singer contestant is working on her first album

Jordyn Woods sat down for an exclusive interview with People. She revealed how she felt the moment that social media knew she was under the Kangaroo costume from the beginning. Jordyn had to hold onto this secret for a very long time. She was one of the first contestants who performed after the Super Bowl.

“Every single week I see tweets about me being the Kangaroo or people commenting on my pictures with the kangaroo emoji, saying, ‘Oh, I didn’t know you could sing,’ with the winky face, just to see if I say anything,” Jordyn told the outlet. “I didn’t even realize people would know, because I never publicly sang. People are just smart.”

I honestly don’t know where to begin. My opening performance night was right after the Super Bowl. I was so nervous and I only had childhood fantasy’s of being on the big stage performing. I worked long days and nights on this project and had to do it in silence. It was the experience of a lifetime and I couldn’t be more thankful. The kangaroo mask may be off for good but this is just the start of something so exciting. Thank you @maskedsingerfox @tcvocs … stay tuned for what’s to come 🎤🦘💋 #themaskedsinger #kangaroomask

Jordyn Woods made headlines for kissing NBA player Tristan Thompson, Khloe Kardashian’s ex-boyfriend and the father of her daughter, True. Khloe and Tristan ended their relationship after she found out about his kiss with Jordyn. The model moved out of Kylie Jenner’s house. The entire Kardashian-Jenner family cut ties with Jordyn. She says the entire world bullied her because of the attention she received. Now, she wants the world to focus on her talent.

Jordyn Woods is working on releasing her first album

Jordyn has maintained a low profile since the scandal. She made a slow return to the spotlight by appearing on The Masked Singer. Even though her journey on the Fox singing competition came to an end, Jordyn still wants to make music. She also wants to take a stand against online bullying. It’s something that she’s dealt with ever since she was a child.

“Even when I was younger I was always kind of the underdog,” Jordyn explained. “I was always different from the rest of the girls that went to my school and then as I got older I faced a lot of bullying online, even with the past recent year. So I just kind of took that and turned it into my strength.”

Jordyn has also been “putting God first.” She credits God for getting her through this difficult time. She wants to be in the spotlight for all the right reasons. Jordyn feels that God has given her purpose in life. Now, it’s time for her use the gifts that she says God’s given her.

Why The Masked Singer fans thought Jordyn was the Kangaroo

During her first performance of “Dancing On My Own,” The Kangaroo proved that she had raw talent. Her clue package revealed that she was bullied and was in the spotlight for the wrong reasons. But the Kangaroo wanted to “bounce back” and become a “role model” for her “little roo.”

After seeing her performance and clue packages, viewers thought the Kangaroo was Jordyn Woods. She recently lost her father and had a falling out with the Kardashian-Jenner clan. It was related to what she referred to about “losing a person” in her clue package.

Do you guess that Jordyn Woods was the Kangaroo? Sound off below in the comments section.