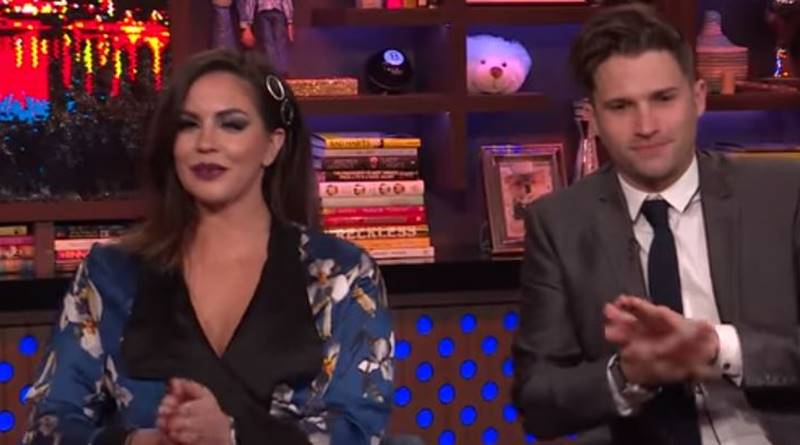 VPR Fans know that Katie Maloney and Tom Schwartz have been together for years. In fact, 2020’s the 10th that they spend together.  Actually, they married already, but the new season also features them marrying all over again due to paperwork misfiling. But fans now think Tom Schwartz is totally disgusting for the way he talked to her in front of other people.

Vanderpump Rules fans usually see Mr. Funny Guy Tom Schwartz. He’s often a bit goofy and sometimes quite cute. But it looks like in real life, he’s not all that sweet and goofy with Katie Maloney. In the recent episode, the Bravo show filmed the usual crew gathering for a party at Tom Sandoval’s place.

Recall that Jax Taylor, who’s always up for fun, and Randall Emmet arranged some fake cops to come and “arrest” Tom Sandoval. Hugely successful as a prank, Randall and Jax thought their idea was a huge joke. But Tom Sandoval’s girlfriend Ariana Madix was less than amused. However, another person also thought it was not funny. That was VPR star, Katie Maloney. In the confessional, Ariana let fans know she thought the joke really amounted to poor taste. But Katie complained about it at the party in front of other people. That’s when Tom Schwartz talked to her very badly in front of other people.

One disgusted VPR fan wrote, “I don’t like Katie, but she was right on this. The way Tom spoke to her was disgusting and bless Beau for defending her, in front of everyone and calling Tom out!” Another one chipped, in noting that Katie had a good point. They wrote, “I actually agree with katie on this. Kind of poor taste ” Then another person slammed Tom Schwartz, saying, “what’s with bravo tv airing men being down right degrading to women…I’m horrified by the way Tom spoke to his wife.”

Whewwwwww! Katie is better than me because I would of two pieced Tom in front of all the guests if he thought it was okay to me like that as his wife. #VanderPumpRules

What do you think about Tom Schwartz dissing on Katie Maloney as he did in front of everybody? Are you also a bit disgusted? Sound off your thoughts in the comments below.