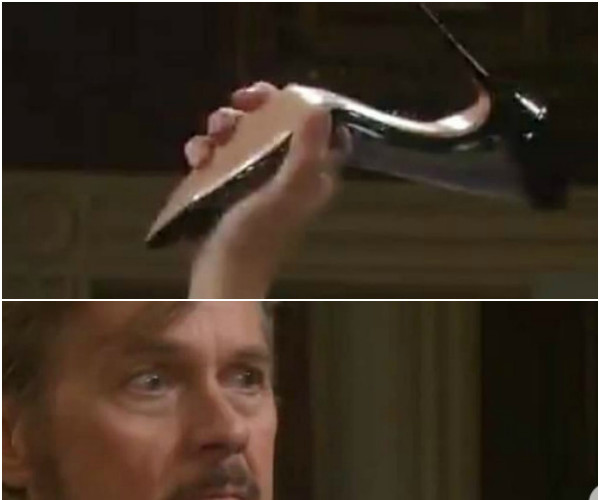 At a time when most people are at home for the second week in a row, there is always an escape. Another World, you might say. No, just kidding. That soap has been off the air for 20 years now. Days of Our Lives’ Salem, USA, is a safe place to wait out the coronavirus pandemic.

As much as we all wish the outbreak is a bad April Fools Day prank, it’s not. But not to worry. DOOL has a great April 1 episode coming up this week. What else can fans expect to happen in Salem?

Last week on DOOL, Xander (Paul Telfer) proposed to Sarah (Linsey Godfrey.) He hopes that marriage will prevent her from dumping him once she finds out he switched her dead baby with Kristen’s (Stacy Haiduk) very-much-alive baby.

The secret grows closer to coming out. DOOL spoilers say Brady (Eric Martsolf) remembers the birthmark on his and Kristen’s baby. The same birthmark Baby Mickey has. Meanwhile, Eric (Greg Vaughan) suspects Nicole (Arianne Zucker) is keeping something from him. Will he start to put the pieces together?

Elsewhere in Salem, young couple Ben (Robert Scott Wilson) and Ciara (Victoria Konefal) talk about their future. Will they be next down the aisle?

‘Stevano’ Loses an Eye on DOOL

‘Stevano’ (Steve brainwashed with Stefano’s mind) will not have a good week on DOOL. His plan to bed Marlena (Deidre Hall) is interrupted by John (Drake Hogetyn.) But John isn’t the one ‘Stevano’ has to worry about. It’s Anna (Leann Hunley.)

An incident between Anna and ‘Stevano’ ends with a high heel in his eye. Kayla (Mary Beth Evans) later tells a devastated ‘Stevano’ that his eye can’t be saved. Does this signal the return of DOOL’s iconic Patch?

April Fools Day Returns on Days of Our Lives

Days of Our Lives has a real treat for viewers this April 1. It couldn’t come at a better time. Several fan favorites will return for a one-time appearance for a special episode. Leo Stark (Greg Rikaart) shows up at Will (Chandler Massey) and Sonny’s (Freddie Smith) door.

As fans know, Stefan was killed off in 2019, but rumors have persisted that he would return later. It is Salem, after all.

Soap fans were shocked this weekend when longtime soap actor John Callahan passed away unexpectedly. He was most known for his role as Edmund Grey on All My Children. His ex-wife, Eva LaRue, shared the sad news on her Instagram.

May Flights of Angels Wing You to Your Rest my Dear Friend. Your bigger than life, gregarious personality will leave a hole in our hearts forever. We are devastated-My great friend, co parent partner, and loving father to Kaya. That big belly laugh, bear hugs, bad puns, ability to harmonize to any song, great kitchen table singing-fests, and two steppin bad ass! “Johnny Numbers”, my All My Children soap stud, the great time keeper, Beatles fanatic ( I wish to God we could go back to “Yesterday”)… Kaya and I are beyond broken hearted, so stunned, sorry that my thoughts are a mess. You gave the best most beautifully written tributes, and I am at a complete loss for words right now for you. I hope Heaven has baseball and that your team always wins! The Yankees has just lost their biggest Fan. ♥️♥️♥️♥️♥️🙏🏼🙏🏼🙏🏼🙏🏼

As AMC fans know, Eva played the love interest of John’s character, Maria Santos. The actor also appeared on Days of Our Lives from 2008 until 2010 as Dr. Baker.

TV Shows Ace sends our deepest condolences for the loss of one of the soap’s finest actors.