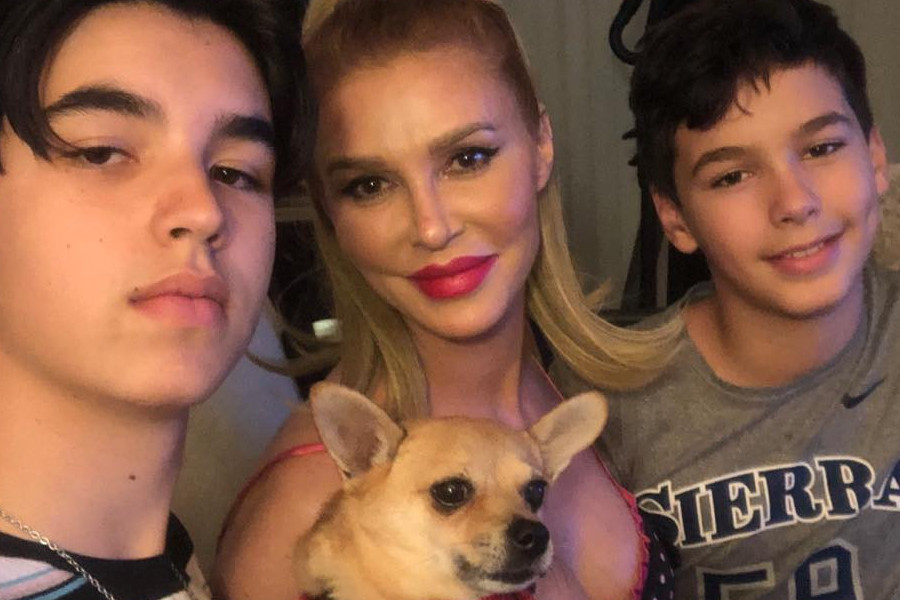 California is on virtual lockdown and RHOBH starBrandi Glanville has been unable to spend time with her two children, Mason and Jake. She shares custody of the teens with ex-husband, actor Eddie Cibrian.

Country singer LeAnn Rimes is their stepmother, marrying Eddie back in 2011 after a scandal in which both were caught cheating on their respective spouses.

Since the affair surfaced, Brandi and LeAnn have engaged in a very public feud, mostly on Brandi’s part. Social media questioned if the duo finally buried the hatchet after Brandi posted a holiday photo featuring Eddie, their two sons, LeAnn and Brandi.

Fans assumed by the photo that the entire family spent the holiday together. Brandi later jumped on Twitter to clarify, TV Shows Ace reported. No, she didn’t spend the entire day with her ex and his new wife. The former model revealed that she was only in the house for a few minutes and the photo was taken during that time.

Despite Brandi’s clarification, she did seem to have a temporary ceasefire with Eddie and LeAnn.

Like most divorced couples, Brandi and Eddie came to an agreement on shared custody of their children. Based on her Twitter posts, last week the boys were with Eddie and LeAnn, much to Brandi’s dismay.

Amid fears of coronavirus spreading, Brandi just really wanted to be with her kids. On March 17, the RHOBH alum tweeted that “divorce sucks” because it means “sharing your children” with your ex and his new wife.

RHOBH’s Brandi Tags LeAnn and Eddie, Calls Them Out, Implies They Lied to Her

Things with Brandi and her ex escalated later that day. Without being specific, she tagged Eddie and LeAnn in a post accusing them of being dishonest. Brandi wrote that the couple revealed their “true colors” to her amid the pandemic.

This is when people’s true colors show @eddiecibrian @leannrimes how truthful are your words ??!!

Some fans were sympathetic with Brandi. Others called her out for airing her family drama on social media. To those people, the RHOBH star responded that sometimes it is the only way to get someone’s attention.

Sometimes social media is the only thing that other people care about !! I’ve done my due diligence trust me !!!!sometimes you have to take it to the fucking masses

Brandi revealed on Sunday that she has since been reunited with her sons. She further suggested that she could have stayed in Eddie and LeAnn’s guest house but they wouldn’t let her, Reality Blurb reports.

Missing her children wasn’t Brandi’s only complaint about the coronavirus panic. Last week she railed against hoarders after she ran out of toilet paper, TV Shows Ace reported.

RHOBH fans can see Brandi in the show’s upcoming Season 10 in a friend role. The Real Housewives of Beverly Hills premieres April 15 on Bravo.