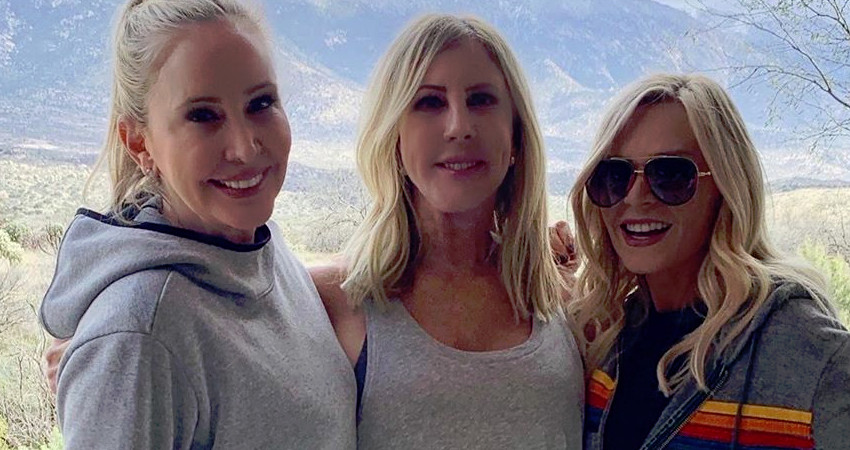 It seems the Tres Amigos has become the Dos Amigos. The Real Housewives of Orange County alums Vicki Gunvalson and Tamra Judge unfollowed former co-star Shannon Beador after it appeared Shannon reconciled with frenemy Kelly Dodd. Tamra and Vicki feuded with Kelly during a tense Season 14.

Both Vicki and Tamra were fired from the Bravo show following the Season 14 reunion. Kelly and Shannon are already filming Season 15 along with Gina Kirschenheiter, Emily Simpson and Braunwyn Windham-Burke.

TV Shows Ace reported that newbie Elizabeth Vargas was spotted filming with some of the other RHOC cast last week.

The drama surrounding the Tres Amigas trio began when Tamra posted a passive-aggressive meme about “fake friends” on her Instagram.

Further investigation by internet detectives revealed that Vicki also unfollowed Shannon. If you’re new to social media, unfollowing someone is the equivalent to scratching their face out of photos.

The shady meme and unfollowing happens within hours of Shannon and Kelly posting a snapshot of them together on their respective social media accounts.

The former rivals are now apparently neighbors. Kelly recently moved in with fiance Rick Leventhal in Newport Beach, California. According to the photo’s caption, the RHOC stars are now in walking distance to each other.

It’s fun being neighbors with these two.. @shannonbeador and John..

Kelly and Shannon were friendly at the beginning of Season 14 but Shannon ended her friendship with Kelly after Tamra and Vicki influenced her against Kelly. However, it seems the pair have turned over a new leaf, much to Tamra and Vicki’s dismay.

Many fans commented on Tamra’s post asking if it was about Shannon. One fan wrote, “why be mad?” They reminded the Cut Fitness owner of her earlier comments that the Bravo head honchos would ‘force’ Kelly and Shannon to be friends.

Tamra shut down the speculation about the target of her post with a simple “who’s mad?” response.

Neither Shannon or Kelly have commented on the skirmish, but Kelly recently dared Tamra to return to RHOC, TV Shows Ace reported.

Tamra and Vicki may not be returning to RHOC, but they reportedly are filming a new show together. The details have been a closely guarded secret.

There wasn’t any love lost between Vicki and RHOC newbie Braunwyn during Season 14. At the reunion, Vicki screamed at Braunwyn for ruining “my show.” The Coto Insurance CEO recently slammed her former co-stars for faking storylines.

Us Weekly reports that Braunwyn promises fans “real relationships” in the upcoming season, a clear dig at Vicki’s earlier comments.

The Real Housewives of Orange County will likely return to Bravo in late 2020. The network temporarily halted production for most of its shows due to coronavirus fears.