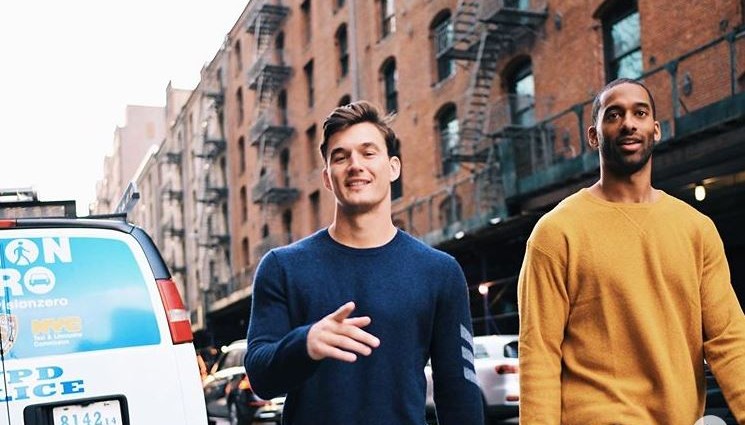 Look out Bachelor Nation. Tyler Cameron’s bestie, Matt James, has just been announced for the new season of The Bachelorette. Matt is not just his best friend, he’s his roommate and wingman from time to time. Let’s take a look at just exactly who Matt James is.

All about Tyler’s roomie Matt

Tyler and Matt spend a lot of time together.  Tyler must of had a big say in getting him cast for Clare’s season. He is 28 and from New York, New York. Matt played football at Wake Forest. As a job he works for ABC Food Tours. His Instagram account is now set to private.  Filming will begin March 13. However, Reality Steve was able to grab some photos of him prior to that happening. They are all posted on Steve’s blog for fans to see.

When The Bachelorette shared cast members pics on their official Facebook page, many commented that they know him. Nothing but great things have been said about Matt. One person noted he didn’t seem right for Clare. Furthermore, that individual plus many others said he would be a great Bachelor. All eyes on Matt to see if that ends up happening!

Once officially announced that Matt would be on Clare’s season of The Bachelorette, Tyler wasted no time speaking out. Being roommates and all, Tyler posted a funny shout out on Twitter. He said, “Hey @Bachelorette ABC can y’all tell Matt to pay the WiFi bill!!”

They recently refurbished their New York City apartment and shared photos on social media. Not only do they live together, they work together as well. According to US Weekly, Matt created ABC Food Tours, which is an organization focused on helping kids in the underserved communities of NYC have a creative way to engage and interact with their areas. Matt and Tyler take groups of students to restaurants and incorporate physical and mental wellness components to every tour.

It’s good to see Tyler joking around again. He has been pretty quiet since his mom suddenly passed away just a few weeks ago. Tyler isn’t currently dating anyone, however, there is some speculation brewing again about Hannah Brown.

Tyler was Hannah’s runner-up last season on The Bachelorette. Hannah recenlty went to Florida to support Tyler through his mom’s sudden passing. It will be interesting to see if anything has been rekindled between them.

In the meantime, what do you think of Matt James being cast on The Bachelorette?