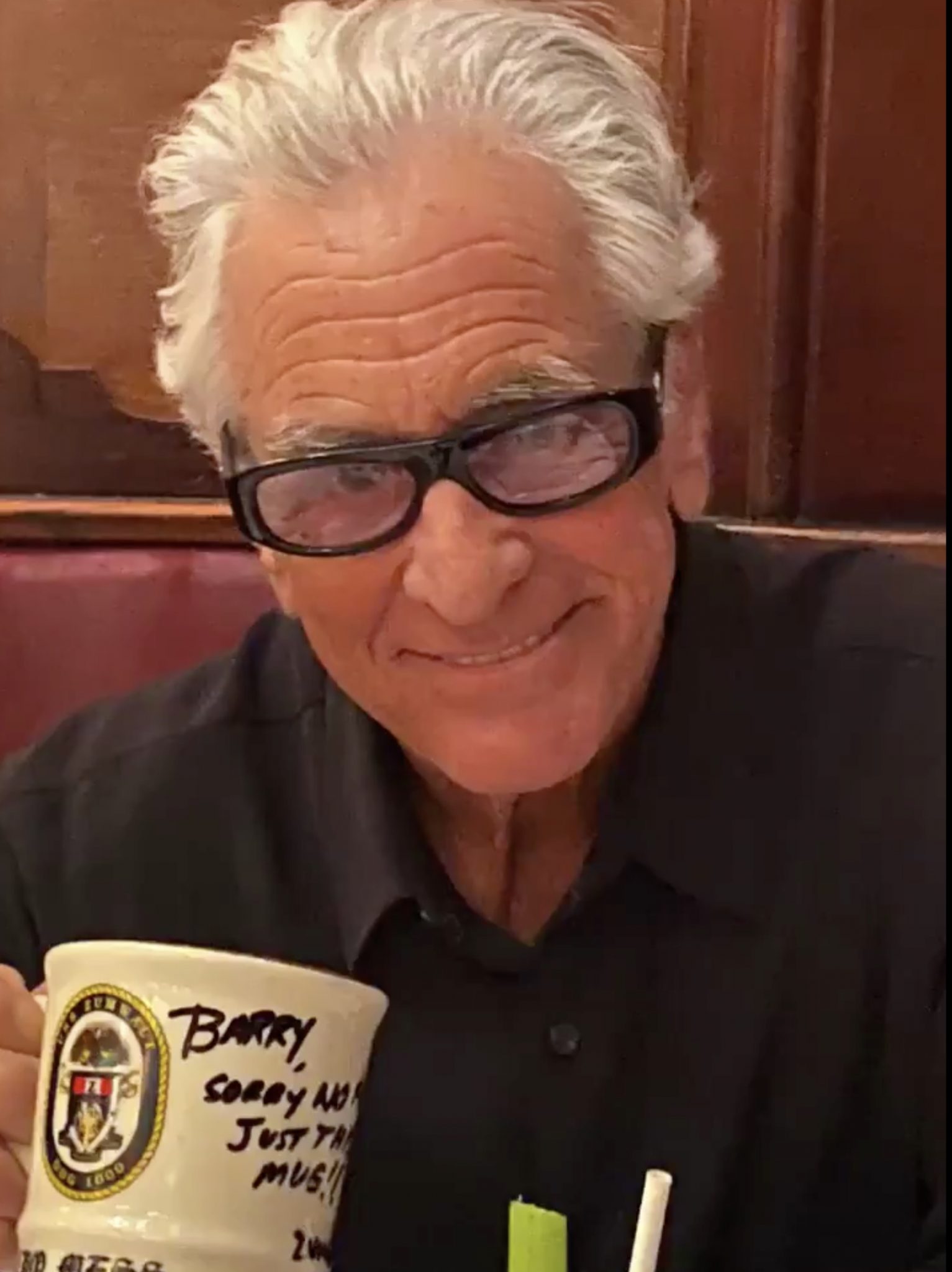 Storage Wars fan favorite Barry Weiss is back! Dan and Laura Dotson hung out with him at the Hollywood Walk of Fame, on Hollywood Boulevard. Want to see and hear Barry read from the Storage Wars issue of Mad Magazine? Then look no further!

Dan and Laura Dotson reunited with Storage Wars fan-favorite Barry Weiss in Hollywood recently at Musso & Franks. Sharing on their self-named YouTube channel, they met up with Barry, and Barbara for some lunch. The couple also presented a challenge coin and signed mug from the U.S.S. Zumwalt members of the Navy.

Barry looked amazing, although a bit slimmer. He smiled at the camera and shared “I’m doing much better.” This is the first time Storage Wars fans have seen Barry since his serious motorcycle accident.

Weiss, who just turned 69 on February 11 clearly was happy to be hanging out with Dan and Laura. He was especially appreciative of the special Navy gifts. He even made a joke about another mug on the table.

Storage Wars fans should feel relieved that Barry Weiss is looking extremely good, especially considering his serious motorcycle accident in April, 2019. As TV Shows Ace reported, on April 24, Barry Weiss and a friend of his, Jamie, were out riding on their motorcycles. Then, an SUV came out of a parking lot without checking for cars on the road!

There was no road left and the bikes could not stop fast enough. Instead, they hit the back of the vehicle, causing serious harm to both motorcyclists. But, Barry Weiss had the more serious injury. He hurt his back, femur and suffered a serious chest injury. Neither drugs nor alcohol were responsible for this serious accident.

Barry Weiss is still a Storage Wars fan favorite. Yet, he was not into storage lockers like the other stars of the show. How did he end up on the show? It was his pal Thom Beers, who eventually became the Storage Wars executive producer and narrator who got him involved. Beers had the idea where treasure hunters could bid on storage lockers.

For Barry, whose personal treasure hunt was to find antiques, he thought this would be another way to uncover some treasures. Although Barry was a newby, his big personality was a hit on the A&E show. After a few seasons, Barry left Storage Wars to star in his own show, Barry’d Treasure, and Storage Wars: Barry Strikes Back, with Kenny Crossley.

According to TV Shows Ace, Barry Weiss is Jesse’s godfather. Monster Garage is coming back to Discovery. Could Barry make a cameo? It is highly likely that won’t happen.

Sandra Bullock’s former, cheating, spouse spoke to Graham Bensinger and had quite a bit to say about Barry and his dad, who did some business together. We knew Barry has loved to collect antiques, and his business partner was Jesse’s dad. In fact, the pair found and put together the antiques that are at the TGI Fridays restaurants.

But, Jesse had a lot more to say. He claims that they were dealing in more than antiques. He also pointed out that there were visits to Knott’s Berry Farm in the middle of the night, well after closing time.

Barry Weiss has never commented on what Jesse James had to say. Nor, has Barry said anything about returning to television. Right now, he is looking television ready. Who knows what Barry will do next?

Be sure to check back with TV Shows Ace for the latest Storage Wars and Barry Weiss news.