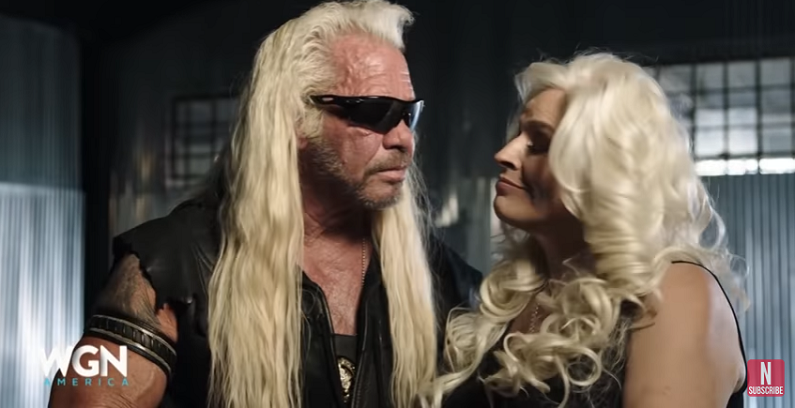 Dog the Bounty Hunter still misses his late wife Beth Chapman. Duane “Dog” Chapman sat down for an exclusive interview about the last eight months. The last few months have been a whirlwind for the reality star. He got close to family friend Moon Angell. Also, his reality show, Dog’s Most Wanted, is reportedly on hold.

Beth passed away in June 2019 after her battle with throat cancer. Dog still hasn’t gotten over her death. He blames loneliness for his shocking proposal to Moon Angell. He also talked about his late wife.

Dog’s Most Wanted star breaks down talking about late wife

As Entertainment Tonight reported, Dog admitted to host Kevin Frazier that he’s still mourning his late wife. He admits that it hasn’t gotten better. Not a day goes by when he doesn’t think of Beth. Dog even got emotional during the interview.

“Oh, I miss her. Eight months, that’s the worst part, it seems like yesterday and they say ‘time heals all wounds.’ No, it doesn’t.”

“Her encouragement, her, ‘I am going to hire a real bounty hunter if you don’t catch this guy’ Her teasing me, her [saying], ‘We say the blessing before we eat.'”

Dog has a hard time feeling emotional. His image is about being a “macho, macho man.” But, Beth was the person who held the entire Chapman family together. The Chapman family has gone through its share of drama since her passing. Dog feels responsible to get the family back together. He also admitted the feud rumors.

The Chapman family has fallen apart. Dog’s daughter, Lyssa Chapman, was arrested last month. Rumors also swirled that Chapman was dating family friend and longtime assistant, Moon Angell. During an appearance on The Dr. Oz Show, Dog asked Moon to marry him. It turns out the proposal was fake, and the pair wasn’t dating. Dog addressed those engagement rumors.

“I am very lonesome, she knew Beth,” he admitted. “And she talked about Beth constantly, ‘Remember what Beth used to tell us,’ and of course I would light right up when she’d say that. I was infatuated with a dream.”

Dog admits that they’re just good friends. They remained friends even after that awkward television proposal. However, he did admit that Moon was “embarrassed” by the surprise proposal.

“She still works for me, and takes care of the finances,” he said, “I kind of embarrassed her a little bit and I shouldn’t have.”

He also denies the rumors that the proposal was faked for attention. The bounty hunter admits he was going through the motions at the time. Then, he realized the mistake he made… And he knew he had to put a stop to the rumors.

Dog admits that he would have dated Moon if she wanted more than a friendship. But she reminds him that no one else will love him more than Beth did. Moon often reminds Dog to stop looking for that kind of love again. While Dog is not dating, he admits that “it’s almost time” to find a new partner, but he’s not ready.  He joked that he lost touch with the dating world.

What are your thoughts on Dog the Bounty Hunter proposing to Moon Angell? Sound off below in the comments section.