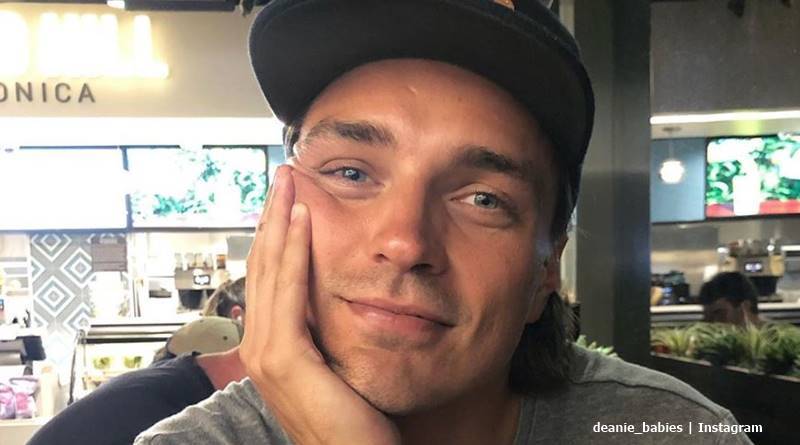 BIP fans know most people recovering from a broken leg would probably lie down in front of the TV and get someone to spoil them silly with chocolates. But, that’s just not Dean Unglert who took to his RV and went exploring. He and Caleynn Miller-Keyes made it to Yosemite this week and they both shared photos. And yes, if you’re a fan of their foster dog Pappy, relax, as he accompanied them.

On his Instagram on Wednesday, Dean shared some photos of him silhouetted against the sunset. The stunning pics got a lot of responses from Bachelor In Paradise fans. One person asked if they took Pappy along. Meanwhile, another fan didn’t know that the park allows pets. Dean replied, saying, “surprisingly there are a few paved paths here that dogs are allowed on! which works well for me because paved paths are all i’m sticking to on crutches.”

Other BIP fans jokingly wondered if Pappy took the photos. But Dean told them no way. He commented, “That old man never does anything he’s told, let alone hold and take a pic for us.” Oh, Pappy! Fans hope he’s good as gold so that the couple keeps him. TV Shows Ace reported that Pappy’s been out and about to beaches and BNB’s and looks very happy. In fact, many fans beg for the couple to keep the little dog.

finally made it to yosemite

Caelynn shared a nice pic of her with Dean

Over on her Instagram, Caelynn shared maybe one of the nicest pics fans ever saw of the couple. Her caption read, “not even a broken femur can stop this guy from exploring 🌲.” Dean replied by commenting, “I mean…it’s definitely slowed me down a lot, nearly to a stop. but thanks.” A few fans got to talking about rings, bracelets, privacy, and proposals after Caelynn said Dean already proposed to her.

Pappy got into the conversation again, and someone again mentioned how skilled the dog is at photography. But no, pappy didn’t take it. They apparently just set up “a tripod.” But others talked about the BIP star walking the paved areas of the park and adventuring. One noted, “If I have a Band-Aid on my finger I pretty much make an excuse not to do any form of exercise. Ha! You guys are amazing! Love following along on your adventures.” Another agreed that “even a headache” keeps them in bed.

not even a broken femur can stop this guy from exploring 🌲

Dean’s accident in the Alps could have been so much worse. In January, Fox News reported that Dean noted he owed his life to the professionals and the other skiers who helped him. With night and a storm coming on, it could have been a nasty outcome for the BIP alum. Now, he’s on the mend and ditched the TV for beautiful places where he exercises his injured leg alongside Caelynn and Pappy.

Did you know that Yosemite allows dogs on paved paths? And, are you so happy that Pappy’s still living his best life with Dean and Caelynn as they explore beautiful places like Yosemite? Sound of your thoughts in the comments below.