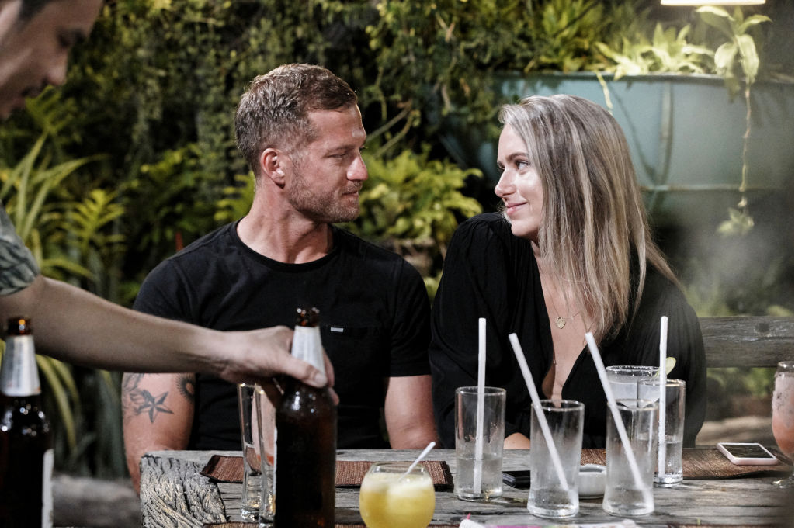 Part one of the Below Deck reunion kicked off on Monday night. It appears to have intensified old feelings since it aired. Brian de Saint Pern has lashed out at Courtney Skippon once again on social media. The deckhand agreed with a fan that he “dodged a bullet.” Understandably, that statement didn’t go over well with Courtney.

The two appear to be feuding on social media once again. This comes after Courtney revealed on the reunion that Brian sent her “aggressive text messages,” which he denies. However, he’s not doing a good job at making himself look like the better person. He’s only supporting Courtney’s claims that he has an “aggressive” personality.

The Below Deck crew members are fighting again on social media. It appears that the reunion didn’t lead to any closure. It only led to more unresolved issues. On Wednesday, February 12, Courtney shared a screenshot of Brian’s tweet. In the tweet, Brian denies the claims that he sent her “aggressive text messages.” He also asked his followers to follow his Instagram page to get his side of the story.

“Just watched the reunion,” Brian wrote. “So I sent aggressive messages, enough that you feared for your life and had to block me!!!??? Go follow me on Instagram to see all the messages I sent Courtney. @iambriandsp #givemeabreak”

Wait. There’s more. One of Courtney’s followers brought another one of Brian’s tweets to her attention. One of Brian’s followers said he “dodged a bullet” with a “spoiled, delusional, ridiculous, asinine snowflake like Courtney.” Brian responded and said: “Couldn’t agree more! Lol.”

Doubling down! This POS isn’t worth your energy pic.twitter.com/EwTKvit0HC

Meanwhile, Brian shared a screenshot of one of his followers watching part one of the Below Deck reunion to his Instagram story. The fan claimed that Brian “absolutely got s**t on by the girls this season” and that it “absolutely makes no sense.” Brian appeared to agree with the fan’s strong sentiments. It’s unclear whether Brian will share more details about their text message drama. Or, maybe he just wanted more followers.

As The Daily Dish reported, they are the couple that didn’t pursue a relationship after leaving the Valor. Things only got worse after the charter season ended. On Monday night’s episode, Courtney said she blocked Brian after she received “aggressive” and “venomous” text messages from him. Brian denied the allegations then as well.

“I just felt like she was bringing me down on Twitter, and I’ve never done that to her,” he explained.

The third stew shared some of the details of the messages he sent her. Courtney said that Brian called her a “cold-hearted woman.” He also wrote that he “doesn’t know” what he saw in her. Courtney was visibly upset when she recalled some of his messages. She said that she felt “anxiety” when she received them.

As Showbiz CheatSheet reported, Courtney refuses to share screenshots of the messages. She prefers to take the high road while Brian continues to hit low. Instead, Courtney shared a comment her ex-boyfriend made about one of Brian’s messages.

I won’t share the private messages, but here’s my ex-boyfriend responding to me sending him a screen shot (*this was a hypothetical expression of anger, he does not condone violence!) #BelowDeck pic.twitter.com/XIT2qmjHKo

“I won’t share the private messages, but here’s my ex-boyfriend responding to me sending him a screen shot (*this was a hypothetical expression of anger, he does not condone violence!*),” she wrote in the tweet alongside the screenshot.

Courtney’s ex was upset with the comment that Brian made about her. He was so angry that he wanted to attack him “with a baseball bat.” When a fan suggested that Courtney should expose Brian’s text messages, she added that she all she wants to do is expose her ex for being “sexy.”

What are your thoughts on Brian de Saint Pern slamming Courtney Skippon on social media? Sound off below in the comments section.

Check back with TV Shows Ace for the latest news on the cast of Below Deck.