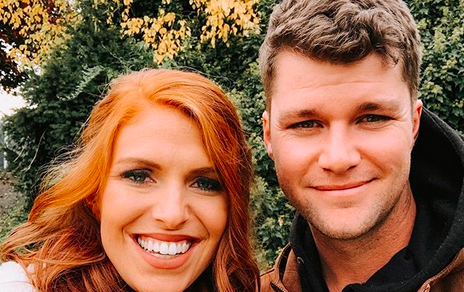 Fans of TLC’s Little People, Big World might know that Audrey Roloff recently had her second baby with her husband Jeremy. Audrey and Jeremy are no longer a part of the show. But, many LPBW fans still follow them on social media to see what they’re up to.

TV Shows Ace reported that the couple’s second baby, Bode James, had arrived. Since his birth, Audrey has been honest about her postpartum journey. She has mentioned that this is a difficult time for her physically.

One of my favorite moments ever😭Ember meeting Bode for the first time😍She is just the sweetest big sister already. We took some videos that I’m sure we’ll share in our stories soon. Jer and I can’t stop smiling and laughing at the things she says about him and to him. She’s so eager to take care of him and give him lots of lovies💗Postpartum has been hard on my body, but cuddling with these precious little loves makes my heart so full. What an honor it is to be their mama.

As she opens up about whatever struggles she’s going through, she gets tons of support from her 1.2 million followers on Instagram. They’re often offering words of encouragement and advice. It likely makes Audrey feel less alone and helps other parents know they aren’t on their own either. Her sister-in-law Tori Roloff is another star who opens up about real-life. Her followers seem to appreciate her honesty too.

Once again, Audrey has opened up about her postpartum difficulties. This time, Audrey revealed that she has a condition called symphysis pubis dysfunction.

In a new post on Monday, she shared a picture of herself pushing both kids in a double stroller. The mom of two wrote, “A walk around the farm is about all I can do these days😅 (thank you symphysis pubis disfunction🙈) I’m really hoping my pelvic bones can heal back soon because I’m so eager to get Ember girl on skis this winter/spring⛷and I can’t wait to start running again!🏃🏽‍♀️Jer is training for a half, and it’s making me so jealous lately😫” .

According to Healthline, symphysis pubis dysfunction affects about 20% of women. It’s typically caused by pregnancy. It happens when the pelvic bones get stiff or don’t move evenly. It can be made worse by movement, such as walking, which Audrey mentioned. The condition can also affect mobility.

A walk around the farm is about all I can do these days😅 (thank you symphysis pubis disfunction🙈) I’m really hoping my pelvic bones can heal back soon because I’m so eager to get Ember girl on skis this winter/spring⛷and I can’t wait to start running again!🏃🏽‍♀️Jer is training for a half, and it’s making me so jealous lately😫

Fans of the LPBW family offered advice to Audrey. One suggested going to the chiropractor, but it sounds like Audrey’s been trying that. She said that she went throughout her pregnancy and goes every two weeks now. Audrey’s followers offered other advice to see if they could help the mom out.

Even if her followers didn’t have advice to share, they offered words of encouragement and told her they hope she feels back to normal again soon.

LPBW will return to TLC this spring. Audrey and Jeremy won’t be on the show, but the rest of the family will be.