On Friday, John-David and Abbie Duggar’s baby, Grace Annette, is one month old. The couple posted two new photos of her on their shared Instagram account.

In the first picture, Grace is laying beside blocks that read “1 month”. The next one is a close-up of her. In both pictures, the baby is sleeping. She’s wearing a gray sweater, pink leggings, and has a pink flower headband on her head.

In their caption, the couple says, “Our sweet doll baby is 1 month old today! We love our little Gracie girl!”

Little Grace has already gained a lot of attention on social media because of how cute she is. John and Abbie’s followers can’t help but comment on how adorable the baby is.

John’s sister-in-law Lauren commented too. She said that the pictures are “so cute!” Duggar fans agree with Lauren.

On the couple’s Instagram stories, they shared a couple more pictures of Grace. This time, the blocks say, “4 weeks”, instead of “1 month”. In one of the pictures, the baby is even smiling. 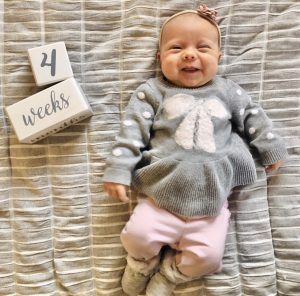 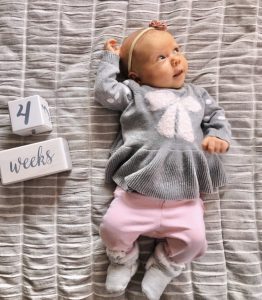 On January 7, 2020, John and Abbie had their first baby. After a rough pregnancy for Abbie, everything went smoothly. Both Grace and Abbie seem to be doing well.

The Duggar couple recently shared that they are adjusting to parenthood. They did mention that their baby doesn’t seem to know the difference between night and day yet. But, hopefully she’ll figure it out soon.

Both John and Abbie seem to be thrilled to have Grace in their lives. From what they’ve said about her so far, the whole family is happy about the newest addition.

TLC typically films birth specials for the Duggar babies. These are aired on Counting On, but they’re also available to watch online.

So, they did the same for John and Abbie and their new baby. TV Shows Ace first reported that you can find the 20-minute special on the TLC website or the TLC Go app. The episode will also air on TLC’s Counting On at some point.

The birth special features Abbie in labor with her first child. The actual birth wasn’t filmed, which is different from the other birth specials we’ve seen. But, viewers saw the little girl at the end of the special once she had arrived.

Can you believe that Grace is already a month old? Have you seen the birth special? Leave a comment below.

Joy-Anna Forsyth Finally Resurfaces After Months Away
‘MasterChef’: Real Or Scripted? Former Contestants Tell All
‘LPBW’ Huge Event Brings All Roloffs Together, What Was It?
WWE NXT 2.0 5/17: 3 Must-See Moments, Full Results
Kim Kardashian Shares What Her Ultimate Goal With Kanye West Is