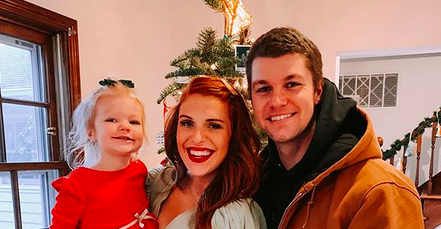 Audrey Roloff, along with her husband Jeremy, used to be on TLC’s Little People, Big World. While the rest of the LPBW family remained on the show, the couple left. Now, because of their fame from the show, they have a large following on social media.

On social media, Audrey shared all about her son Bode’s birth. She and Jeremy even made a whole podcast episode about his birth, which you can find here.

It’s becoming more and more popular for celebrities and other individuals alike to share their birth stories. In addition, birth photography and birth videos are becoming more popular. These are special ways for parents to document one of the most special days of their lives.

That feeling when you hold your baby for the first time😭It’s unlike anything else… such an overwhelming rush of emotions. As Sheldon Vanauken would say, ‘A moment made eternity.’ ⁣ ⁣ I haven’t shared anything about Bode’s birth yet… but tomorrow on @behindthescenespodcast I’m sharing the full story☺️ Click the link in my bio to subscribe to our podcast and you’ll be notified when the episode drops tomorrow morning!🙌🏻 And quick disclaimer… please excuse my postpartum brain in this episode🤣

On Instagram, Audrey shared the details of her labor and delivery with her second child, Bode. She shared a series of beautiful photos of the process. Along with the pictures, she wrote, “The morning of January 8th I went in for my 40 week appointment🤰🏼 and I was 3cm dialated but not having contractions or any signs of labor yet… other than Bode feeling like he was going to fall out of me he was so low🤪 I just assumed he would come late because Ember was 12 days late🤷🏼‍♀️ But since it was my due date there was a little bit of extra hopefulness that just maybe… 🙏🏻⁣”

Then, the former LPBW star continued, “When I got home from my apt. I snapped a pic of my 40 week belly and posted it saying, ‘Happy due date baby boy, you can come out now.’ Little did I know… I was just a few hours away from holding our son for the first time👶🏼⁣”.

She then described how labor progressed and said,

“I had lots of Braxton Hicks all throughout my third trimester so I wasn’t really paying much attention to how consistent they were this time around. I just figured I’d know for sure this time around when it was the real deal. But with Bode it wasn’t so obvious🤔⁣. Around 4:00pm I was having lots of consistent Braxton Hicks contractions, but they were a little more uncomfortable than normal. By 4:30 I thought what the heck… I guess I’ll start timing these just to see🤷🏼‍♀️They were about 4 minutes apart. ‘Just in case’ I went up stairs and put the last minute things in my hospital bag and change my clothes. While upstairs the contractions turned into the kind where you have to stop and focus on breathing. ⁣“

The LPBW alums were rushing to the hospital and ended up in traffic. Audrey said, “My labor with Ember was pretty fast, so we knew we wanted to air on the side of leaving sooner than later. We ended up leaving right after my mom arrived. Straight into rush hour traffic🙄 25 minutes of laboring in the truck while in stop and go traffic🤦🏼‍♀️ Jer may have run a few red lights🤫⁣⁣“.

LPBW fans think this had to be stressful for her, especially because things were progressing quickly. Luckily, they made it to the hospital in time.

Near the end of her social media post, Audrey shares about the end of labor. She says, “We checked into labor and delivery at the hospital at 6:30 and I was 8 cm dialated🤯 … Bode was born at 7:36 sooooo from the time we got there, things happened fast!”

TV Shows Ace reported that Bode James was born on January 8, 2020. He joins his big sister, Ember. So far, Audrey has reported that Ember is doing a great job as a big sister.

The family seems to be adjusting well to having a new baby in the home. The couple’s extended family is thrilled to have another baby in the family too. Bode’s cousin, Lilah, arrived shortly before he did. She was born in November.

Did you enjoy reading the birth story? Have you listened to the podcast? Leave a comment below.