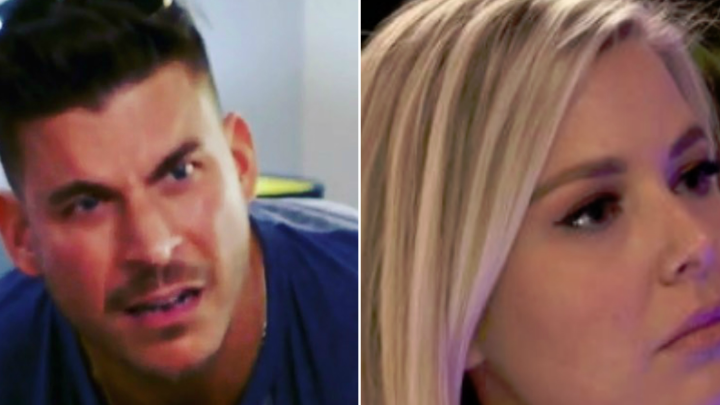 Vanderpump Rules star Jax Taylor is up to his usual social media tactics. The former model often tangles with viewers over his behavior on the show. Jax also uses social media to shade his co-stars.

His latest targets are Ariana Madix and Tom Sandoval. Reality Blurb reports that in a now-deleted tweet, Jax called his co-star the “most negative” person. The diss came about due to Jax’s frustration over Ariana “hiding” the nitty-gritty parts of her and Sandoval’s relationship.

However, that wasn’t the only topic Jax addressed on social media. He spent a large part of Wednesday defending his behavior on Tuesday night’s episode of VPR.

This week’s episode of Vanderpump Rules featured some of Jax’s bachelor party. The boys visited a strip club with fiancee Brittany Cartwright’s blessing. However, she did set some ground rules for her now-husband. Namely, no lap dances or going to private rooms with the strippers.

Fans were less than impressed when Jax did receive a lap dance after telling Brittany otherwise. Thus began a long stream of tweets defending himself from fans who tweeted their disapproval.

I got a lap dance for 3 mins I was at the club for 3 hours obviously they cut to the part where my friends bought me a lap dance, it’s called editing. I was allowed to have lap dances so it’s not a lie I never lied. https://t.co/h2OfS4lY9P

Jax repeatedly tweeted that the lap dance was three minutes of footage out of three boring hours. In fact, Jax blames editing and his brother-in-law for the lap dance.

My brother in law bought me a lap dance that was 3 minutes long and I was at the strip club for three hours, so of course they are going to cut to the scene when the only time I was interesting was that 3 minutes. She wanted to know If had private dances.

The bad boy of Vanderpump Rules even tweeted his distaste for strip clubs, claiming that he gets “embarrassed.”

Yeah but I have never liked them….i never have and I get really embarrassed and never know what to say, it’s a train wreck, I feel like I never know where to look either. 🤦🏻‍♂️ https://t.co/qY5AzYhPro

As viewers are seeing on Season 8 of Vanderpump Rules, things are tense between Jax and former bff Sandoval. Following the Season 7 reunion, Jax threatened to revoke Sandoval’s best man duties. While he ultimately relented, things are still not good between the two.

Fans are often tweeting Jax their thoughts on his VPR co-stars. Oftentimes, Jax has a shady response, particularly about co-stars he’s still blocking. (The reality star went on a massive blocking streak months ago and has yet to unblock most of his co-stars. He also enjoys blocking fans who argue with him.)

In response, Jax reminded fans (and all of his Twitter followers) that Sandoval also cheated on Kristen.

Umm they both cheated on each other. Let’s make that clear. https://t.co/pMZvVxQZVh

Kristen is one co-star that has earned her way back into Jax’s good graces. He no longer blocks her, though Sandoval and Ariana are definitely blocked.

Another fan tweeted their annoyance with Sandoval’s constant bragging about owning “10%” of a bar. Jax was quick to point out that it was actually only 5%.

Ariana recently opened up about her depression on Vanderpump Rules. As a result, fans are responding to her candidness by tweeting to her on social media. In some cases, the tweets are supportive and positive, but not always.

One fan called Ariana a ‘downer’ on the show. Like Jax, the fan felt Ariana was a negative person with a poor attitude. The VPR star shared the tweet and encouraged her followers not to let anyone in their life dismiss their depression.

if you live with depression and someone speaks to or about you like this, i am SO fucking sorry. don’t let them stop you from getting help or speaking your truth. i got you ❤️ https://t.co/BCTmpIwqFY

TV Shows Ace reports that Ariana isn’t Jax’s biggest fan either. When asked which co-star she would choose not to interact with again, Jax was the response.

Vanderpump Rules’ Season 8 continues on Bravo. Jax assured fans that Brittany’s reaction to the strip club next week will make them apologize for doubting him.

She told the guys to take me to the strip club have lap dances and do whatever, just NO private rooms. And when you see what happens next week, y’all will have your foot in your mouth and I expect an apology. 😘 https://t.co/mWizBEKRgY

Is Buzzy Cohen In The Running For ‘Jeopardy!’ Host?
Ben Affleck’s 10yr Old Drives Lamborghini Into BMW With JLo In Back?
‘Below Deck’: Daisy Kelliher Slams Ashley Marti For Being No-Show?
‘I Love A Mama’s Boy’ Season 3 Episode 2 Recap- June 26
‘Sweet Home Sextuplets’: Courtney Waldrop Gets Relatable With Moms